The Sims Wiki
Register
Don't have an account?
Sign In
Advertisement
in: Types of lots, World Adventures, Jungle Adventure,
and 6 more

A tomb is a special type of lot introduced in The Sims 3: World Adventures and The Sims 4: Jungle Adventure. They usually contain tomb objects that together act to make a puzzling adventure.

In The Sims 3: World Adventures, a tomb is both a lot assignment in Edit Town and the Create a World tool.

For the walkthrough to complete the tombs, see here.

Tomb puzzles are defined by setting the tomb fogger object to 'final room' and giving the tomb a name. There can be multiple tombs on any kind of lot type, including residential lots.

Tombs can be a place of suspense and discovery. Unlike common buildings, unexplored areas of a tomb are often fogged out as Sims explore new tombs. Once a Sim enters/sees into an unexplored area, the fog of the room fades away, and a sound effect plays.

The following list is lots assigned as tombs in the sub-neighborhoods of The Sims 3: World Adventures expansion pack. This list does not include residential lots, art galleries, nectaries, or markets that contain tomb objects.

There are two kinds of tomb lot assignments in Edit Town and Create a World, Tomb and Hidden Tomb. These assignments are locked from use outside of the The Sims 3: World Adventures sub-neighborhoods in-game. The tomb lot assignment generates a tomb map tag, and it attracts explorer NPCs. The lot assignment does not generate the moodlets players will see in tombs, these are instead generated by the tomb fogger tomb object.

Hidden tombs (or hidden lots) are a new kind of community lot and lot assignment introduced in The Sims 3: World Adventures.

When a lot is tagged with this type they will not generate a map tag and so will be largely indistinguishable from other the surrounding terrain unless inspected closely. Although introduced in World Adventures, this lot type functions in the base game without the expansion pack if it is set through the Create-A-World tool. Hidden Tombs do not have to be a tomb—they can be decorative, or a secret lot containing rare and usually inaccessible items. NPCs and townies will not try to route to hidden lots. There are many lots designated as Hidden Tombs throughout the subhoods of Shang Simla, Champs Les Sims, and Al Simhara. 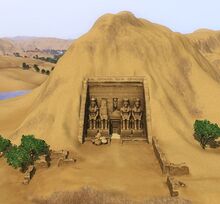 Abu Simbel is a memorial by King Ramses II for his wife Nefertari. Its name also contains the word "Sim", making it a pun. 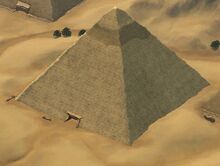 The Great Pyramid in Al Simhara. 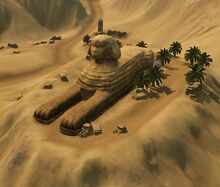 The Great Sphinx in Al Simhara.

This Sphinx is based on the real Egyptian Sphinx. While the real Sphinx is fully solid, the tomb is inspired by the mythical Hall of Records under The Sphinx. This is the location of the soulpeace statue that serves as one of the main ways to cure the mummy's curse from a sim. In order to cure the curse, the sim must walk in front of the Sphinx, plead with it, revealing the entrance. The sim must then explore the tomb entirely until they reach the soulpeace statue. Then they must then use the "Cleanse" interaction on the statue, curing the curse from the afflicted sim.

Pyramid of the Burning Sands[]

Pyramid of the Burning Sands 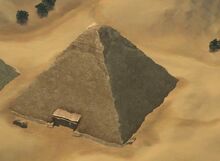 Pyramid of the Burning Sands in Al Simhara.

Placed beside the great pyramid and the center of the fire quest. There are a ton of Flame Fruits to harvest here. The first part of the pyramid you don't need to explore without a key stone. There's a rather nice treasure room in this pyramid, with 6 chests and a sarcophagus where there is a hot spot for an encounter of a mummy! It is based on the Pyramid of Khufu.

Pyramid of the Sky[]

Pyramid of the Sky 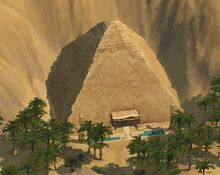 Pyramid of the Sky in Al Simhara.

There's a harvestable life plant, death flower, money trees and a Sigil of the Tomb of the Desert Ocean to be found here. There is also a canopic jar here as well. Be sure to check for four hidden doors in the last chamber to find a shortcut out as well as some additional treasure.

Pyramid of the Wind[]

Pyramid of the Wind

Pyramid of the Sky in Al Simhara.

This is the smallest pyramid which is able to be explored. This is a quick adventure with treasure and one sarcophagus. There is a chance of a mummy encounter. There's no more to it than there seems to be in this little pyramid. The location of the pyramid and its small size seems to be based on the Pyramid of Menkaure. 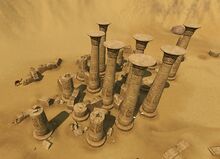 Ruins of Karnak in Al Simhara.

The ruin of Karnak is a real life temple in Egypt and is one of the most photographed sites of Ancient Egypt.

This tomb has only one room. It contains an assortment of bugs (for example ladybug), a chest containing a Sarcophagus of the Kings Fragment, a tomb hole containing an oval cut alabaster with a value of §61 and around 12 ancient coins on the floor beside the stairs.

The Temple of Queen Hatshepsut[]

The Temple of Queen Hatshepsut

The Temple of Queen Hatshepsut in Al Simhara.

Like the Abu Simbel tomb The Temple of Queen Hatshepsut is based on the real temple in Egypt. 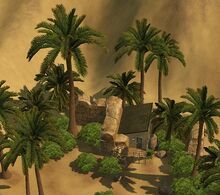 Tomb of Discovery in Al Simhara.

The Tomb of Discovery is the first tomb most adventurers will explore when they arrive in Al Simhara. It has very simple traps, and acts as an introduction to various tomb objects. 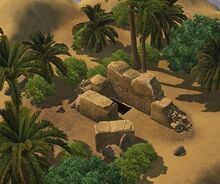 The Copper Quarry in Al Simhara.

The Copper Quarry is a simple tomb with a few various traps inside of it. The outside usually has a couple of dig sites for the sim to find valuables. 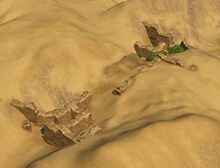 Mastaba Ruins is nothing more than a hidden short cut that can get Sims to and from the Pyramid of the Sky faster than going around the coast. The Mastaba Ruins can be seen on the Sim music video, Matt & Kim, Daylight. And just shows them walking in with many mummies. 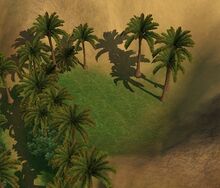 The Small Oasis is an entirely empty lot hidden above the Ship's Oasis. It may have been cut due to deadline pressures. 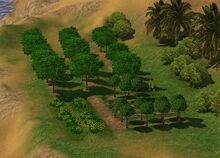 An unnamed orchard in Al Simhara.

The unnamed orchard is where Sims can harvest some decent quality rare fruits in Al Simhara. 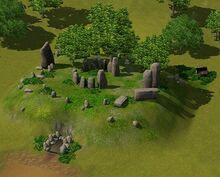 The Forgotten Burial Mound features a number of small tomb puzzles, and is central to some adventures in Champs Les Sims. It seems to be a Gallic burial mound with stone circles above the mound, at the end of the tomb graves can be found with treasure. Behind the mound there is a boulder that can be destroyed with Pangu's Axe, which will lead to a separate area inspired by the original Legend of Zelda game. This area was designed by Ray Mazza.[1] It is usually the first tomb most players will get to explore when they first come to Champs Les Sims. 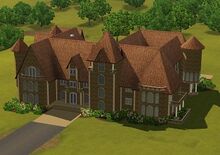 The Chateau du Landgraab is the primary tomb lot in Champs Les Sims. It used to be inhabited by the famous Admiral Landgraab, and possibly other Sims as well because it has several bedrooms and a nursery. It includes two double-bed bedrooms, a bedroom with two single beds, a baby room, a private study, private library, kitchen, several bathrooms, and many relics and treasure chests. Because Landgraab was a worrywart and obsessed with military code, the place is dotted with traps.

The Champs Les Sims Nectary tomb is entered through a secret passage in the basement underneath the nectary, which is not marked as a tomb room. It is one of, if not the, largest tombs in World Adventures which not only contains many ancient nectar treasures, but also Egyptian-based treasures, as well. This semi-hidden tomb contains two mummies which are said to be a king and queen of Egypt, "sipping on nectar till the eve [they] die." There are several puzzles in this tomb, but none of them very difficult. Several traps guard certain treasures, but the majority of them can be disabled by solving puzzles and following directions given by plaques on walls. 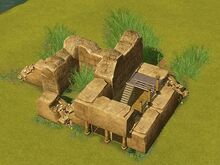 The Little Island is a hidden tomb that is on an island in the middle of Champs Les Sims river. Originally, it can be accessed through the hidden frog pond across the river or by using zenoportation. The little island is the exit to the Tuatha's Garden tomb adventure. Inside the tomb, there's a large tomb puzzle leading to money trees and relics. As of Patch 42, Sims can swim directly to the island across the river, or with Island Paradise, Sims can just take a boat. And also, with Into the Future, Sims can use jetpack to fly there.

The Hot Springs and Abandoned Barn are not tomb lots, they are tombs built on park lots. 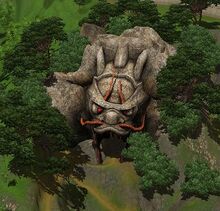 The Dragon's Maw in Shang Simla.

Since it first appeared in promotional material, The Dragon's Maw has been one of the most intriguing lots in The Sims 3: World Adventures. Not only does it have an impressive carved dragon's head, but a mysterious fog also periodically drifts out of the head's mouth. It contains a tomb, entered through the mouth, and is the centre of several adventures. 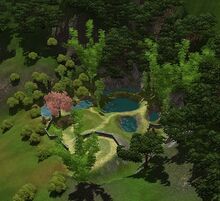 The Dragon Springs does not contain a tomb, even though it is a tomb lot. Instead it is a landmark in Shang Simla, and the only place in the game where Sims can catch the rare dragon fish. It features a The Water Breathing Dragon statute prominently.

Halls of the Lost Army[]

Halls of the Lost Army 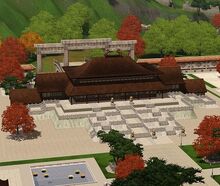 Halls of the Lost Army in Shang Simla.

The tomb inside the Halls of the Lost Army is the first tomb most players will explore in Shang Simla. It features a simple tomb, and attracts many explorers. It is based on the Hall of Supreme Harmony in Forbidden City. 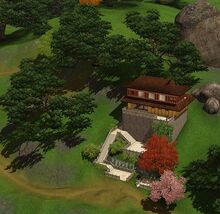 The Resolute Fist Retreat has beds and Martial Arts training objects, so that it looks like an academy with a tomb map tag. However, it has an extensive tomb in its basement.

The Temple of Heaven[]

The Temple of Heaven 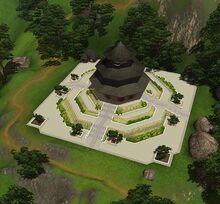 The Temple of Heaven in Shang Simla.

The Temple of Heaven sits high above Shang Simla, and contains several tombs, including the tomb that leads to Pangu's Axe. It's based on the real world Temple of Heaven. 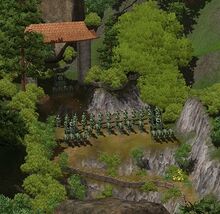 The Terracotta Army in Shang Simla. 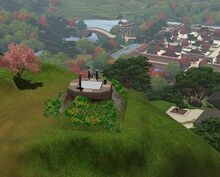 Crane Master Martial Arts Park is a hidden tomb, but it has no tomb objects on it. It does have Martial Arts training equipment like the Sheng Hai Training Dummy. It also has a great view of Shang Simla. The Crane Master or Tsuru-Sen'nin appeared in Akira Toriyama's famous Dragon Ball manga. 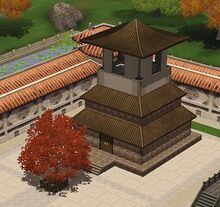 East, North, South and West Towers are all hidden tombs. They are clones of each other, and contain nothing of note. 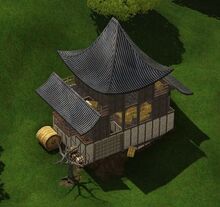 Han's Barn is a hidden tomb, but it contains no tomb objects, nor anything else of use. It is just there to add flavour to the area. It is clearly related to Han's Orchard.

Omiscan Temple is the only tomb in The Sims 4: Jungle Adventure located in Selvadorada. Its puzzle is to trigger the correct switch to open the door. Triggering a wrong switch will instead cause a trap. After several doors are passed, several treasures of high value can be found. Sometimes, a Skeleton can be encountered inside the temple.

The door is locked by: fire, poison, electricity, or a force field.

These are the possible switch types:

Unlike tombs in The Sims 3: World Adventures, Omiscan Temple resets and chages its layout after it is fully explored, giving players a different challenge with each visit. Once fully explored, the temple becomes inaccessable for 24 hours while it is resetting. Players can make a lot of money by fully exploring the temple and selling the treasure found. This process can be repeated.