Todd Gergis is one of the pre-made NPC Music and Dance hobby instructors at the My Muse - Music and Dance Studio. He comes from Hobbies, the secret sub-neighborhood introduced with The Sims 2: FreeTime. The other two music and dance hobby instructors are Noelle Dennis and Edith Lawson. Todd appears in every neighborhood once FreeTime has been installed.

He can be made playable by befriending and asking him to move in, or by marrying him. Todd has short brown hair, green eyes, and dark skin. He is a Romance Sim with the Libra zodiac sign. As far as personality, Todd is very outgoing, quite nice, and somewhat playful. But he is very sloppy and lazy. Todd is mostly interested in Environment, Culture, and Travel. He has the same facial structure as Curtis Ryan. Todd's pre-destined hobby is Arts and Crafts.

Even though his default head-shot depicts him having hair in a buzz cut, and a blue cowboy top, when Todd is first spawned in-game, he will have long hair that is slightly lopsided. He will also wear a pale green and black outfit. However Todd will still retain the hairstyle in his default thumbnail, for most outfits besides everyday. When a Sim gains enough enthusiasm in Music and Dance, he arrives to invite them down to take lessons. Unusually, Todd has a pre-set relationships with an NPC Food Judge. What makes it even more unusual is that food judges can not be interacted with in normal gameplay. 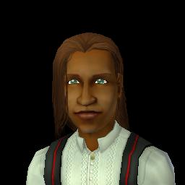 Todd Gergis' appearance in-game.
Add an image to this gallery
Retrieved from "https://sims.fandom.com/wiki/Todd_Gergis?oldid=838647"
Community content is available under CC-BY-SA unless otherwise noted.