The Tinker family is a pre-made family residing in Bluewater Village in The Sims 2: Open for Business. They display a natural disposition towards toy-making. Although they have everything they need to open their own store in their backyard, they have not yet opened it when first played. The family started out when Ron Tinker married Lauren Tinker, and they had a son named Stephen. He married Wanda, the daughter of Damion and Autumn Zarubin. They had a daughter, who they named Melody.

The Sims 4: Eco Lifestyle features a family with the surname Tinker in its world of Evergreen Harbor, but it is unclear if this family is meant to be related to the Tinkers of Bluewater Village. It consists of a married couple, Tina and Yasemin Tinker, as well as their daughter, Olive.

Tinker -- One who enjoys experimenting with and repairing machine parts. A clumsy repairer or worker; a meddler.
Melody -- A tune; sequence of notes that makes up a musical phrase or a studious and quiet woman.
Stephen -- from stephanos "crown, and garland."
Wanda -- vandalism". Also possibly (Old German) "wanderer". Harpsichord player Wanda Landowska.
Ron -- "Having the gods' Power," from rögn "gods," lit. "decreeing powers" (pl. of regin "decree") + valdr "ruler."
Lauren -- "a shimmering effect seen over a hot surface."
Tina -- A diminutive of various names ending in "-tina", such as Christina or Martina.
Yasemin -- The Turkish form of Jasmine, referring to the plant of the same name.
Olive -- Derived from the olive tree. 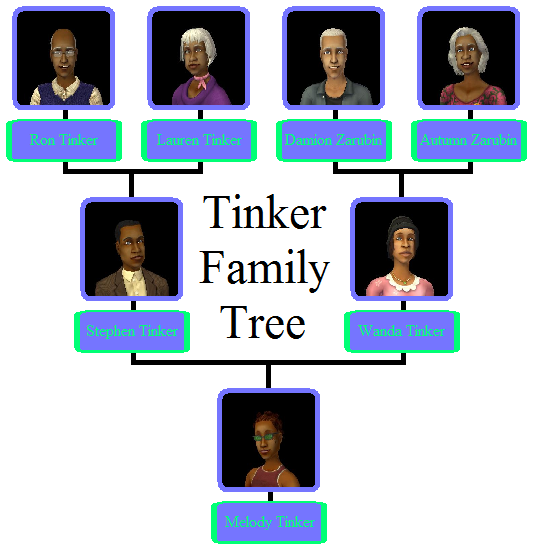 Add an image to this gallery
Retrieved from "https://sims.fandom.com/wiki/Tinker_family?oldid=918027"
Community content is available under CC-BY-SA unless otherwise noted.