Timmy DeBleu is a pre-made deceased Sim who once lived in Twinbrook. He passed away due to the Mummy's Curse and rests in the Ivy Hill Graveyard. His grave suggests he completed his lifetime wish before dying. 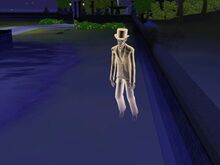 Timmy as a ghost
Add an image to this gallery

Resurrection tip
This Sim can be brought back to life with ambrosia or with the Oh My Ghost! opportunity. For more information, read Game guide:Bringing Sims back to life.
Retrieved from "https://sims.fandom.com/wiki/Timmy_DeBleu?oldid=875106"
Community content is available under CC-BY-SA unless otherwise noted.