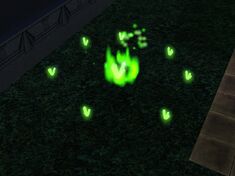 Tiberium is a gem present in The Sims 3: World Adventures.

Tiberium is a very rare and often valuable gem. The ore itself is around §100, and getting it cut greatly increases the value of the gem. Whether it is a raw ore or cut, it will give a Sim a negative moodlet (-25 mood), so it is best kept out of a Sim's inventory. No matter what its form, it will glow and make a soft "ping" when placed on lots.

Tiberium can be cut into 2 different forms:

No matter what the cut is (whether it's heart or small spire), a non-large cut of Tiberium outside a Sim's inventory will grow into a Large Spire Cut within a day, providing it has sufficient space to grow, giving it a value of around §40,000. With Supernatural installed, even the powder will grow into a Large Spire cut if processed through the Gem cutter. Therefore, the Gem cutter is a great way to multiply the profit. If a mod is installed that allows Tiberium to be obtained in cuts other than the above, those cuts will also grow into Large Spire cuts. However, raw Tiberium will not grow in this manner in most cases. Large cuts of Tiberium gems will also not morph into Large Spire cuts.

The claim that Tiberium can spread propagated early on after its introduction into Sims 3 in hopes that it would mimic its behavior in the Command & Conquer universe. This, unfortunately, has been disproven. [citation needed]

Retrieved from "https://sims.fandom.com/wiki/Tiberium?oldid=925180"
Community content is available under CC-BY-SA unless otherwise noted.