The Sims Wiki
Register
Don't have an account?
Sign In
Advertisement
in: Sims, Male Sims, Teens,
and 21 more
English

Tiave Teens is one of the pre-made downtownies in The Sims 2: Nightlife. He can be made playable by aging him up and marrying him, sending him to college, or asking him to move in. Tiave's career is randomized at the start of the game and he is mainly interested in Money, Paranormal, Fashion, Crime, Entertainment, and Work.

Strangely, he and the rest of the Teens siblings are recognized as Jon Smith Tricou's children, but the relation is not mutual, and they are not related to any of the other Tricou family members.

Tiave's name is randomized when Downtown is generated. The name "Tiave Teens" is only referenced in the game files. When he grows into an Adult, it becomes clear that he uses the first of the two broken Maxis face templates. His brother Orion uses the second one of the two.

Despite being a Pleasure Sim, Tiave has the lifetime want to reach the top of the Criminal career. This want makes him compatible, at least in theory, with a Knowledge or Fortune Sim, though he would have better chemistry with a Romance, or Popularity Sim. 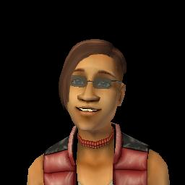 What Tiave's face would have looked like, had it not been broken
Français Polski Русский
Community content is available under CC-BY-SA unless otherwise noted.
Advertisement