Tia Rose is a pre-made police officer from Sunset Valley. She can be seen by Sim's out after curfew or when catching a burglar, similar to her male counterpart, Eugene Hunter. She doesn't have any skills and relationships at the start of the game and has no set lifetime wish. Unusually for a pre-made adult, she only has three traits instead of the usual five. She can be made playable by marrying her, or asking her to move in.

"Tia" is a Portuguese word that can be translated to "aunt". In Spanish, it is similar, but has an accent in the i, so it reads as "Tía", which also means "aunt". She is the only pre-made female Sim in Sunset Valley to have a mohawk. 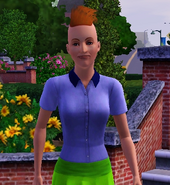 Tia at the park

Tia's outfits
Add an image to this gallery
Retrieved from "https://sims.fandom.com/wiki/Tia_Rose?oldid=915974"
Community content is available under CC-BY-SA unless otherwise noted.