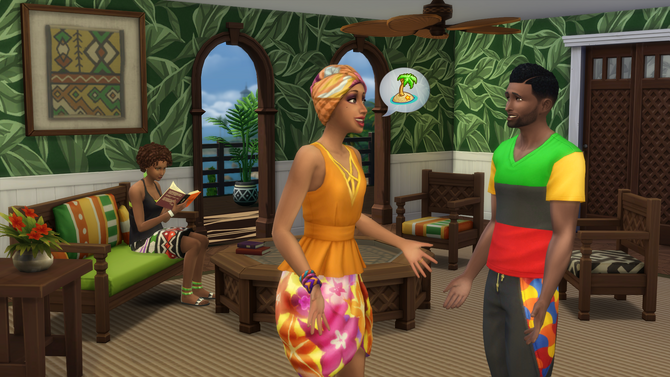 An official blog post by EA confirms that over 100 new skin tones (with accompanying lightness sliders), as well as makeup opacity sliders, will be added to the game in December. The forthcoming update on October 6 for PC/Mac and November 10 for consoles will improve the game's hairstyles and current skin tone options. (Sep 24, 2020)

A trailer for The Sims 4: Journey to Batuu has premiered on the 2020 Gamescom livestream. Players will be able to take their Sims to the new destination world of Batuu, where they can receive missions from iconic Star Wars characters, build their own lightsaber, befriend a droid, and more. The pack is set to be released on September 8, 2020. (Aug 27, 2020)

The new trailer for the player-voted Nifty Knitting Stuff pack confirms that it will release for The Sims 4 on July 28, 2020, for both PC and consoles. The pack will include a knitting skill, rocking chairs, an online craft store, and more. (Jul 15, 2020)

The Sims 4 now available on Steam

As announced on the EA Play 2020 livestream, The Sims 4 and all of its content packs can now be purchased on Steam. However, Origin and an EA account is still required to play the game. (Jun 19, 2020)

After being leaked and teased on May 5, 2020, Electronic Arts has officially unveiled the trailer for the ninth expansion pack for The Sims 4, The Sims 4: Eco Lifestyle. The pack is focused on sustainable living, renewable energy, crafting, community projects and the new world of Evergreen Harbor. The pack is due to be released on June 5, 2020 on all platforms. (May 6, 2020)

Over the past six months, players were able to vote for a new stuff pack for The Sims 4, deciding on the theme, the assets, the gameplay, the icon and the name. Voting has concluded and Nifty Knitting Stuff is the winner! The pack will feature knitting, rocking chairs and an online store in which Sims can sell their creations. (May 3, 2020)

EA has officially announced the sixteenth stuff pack for The Sims 4 - The Sims 4: Tiny Living Stuff. Its trailer debuted on January 7, 2020 and is due for release on January 21, 2020 on PC/Mac and February 4, 2020 on consoles. The stuff pack marks the return of the murphy bed and a new tiny home residential lot assignment. (Jan 8, 2020)

After numerous leaks by online retailers, EA has dropped the official trailer for The Sims 4: Discover University - the eighth expansion pack for The Sims 4. It is set for a November 15, 2019 release on PC and a December 17, 2019 release on console. The pack re-introduces the college experience to the game, as well as the return of the Servo life state, in its new campus world of Britechester. (Oct 22, 2019)

Fifth anniversary update for The Sims 4 is now available

A patch for The Sims 4 has been released in celebration of the game's fifth anniversary. It includes new configuration options for stairs, Muslim-inspired Create a Sim and build mode items, and more. (Sep 6, 2019)

Official release dates have been confirmed in a trailer for The Sims 4: Moschino Stuff, previously announced at EA Play. It will be released on August 13th, 2019 for PC and Mac, and September 3rd, 2019 for PS4 and Xbox One. (Aug 7, 2019)

The latest Maxis Monthly livestream showcased an overhaul of the game's general theme and design, which will be added in the 82nd patch coming on July 16th. Other patch additions include a "story mode" for Create a Sim and over 1000 world objects being unlocked for use in build mode. (Jul 13, 2019)

A new update for The Sims 4

The 81st update for The Sims 4 has been released! Alongside many bug fixes the update adds a portable lounge chair, new options for swimming, changes to fishing, a randomize traits button to Create a Sim, new build mode additions such as stilted foundations, pride month content, and more. (Jun 18, 2019)

Along with the announcement of the Island Living expansion pack, EA has also announced The Sims 4: Realm of Magic, a new game pack that will add magic to The Sims 4. A new stuff pack, The Sims 4: Moschino Stuff, was also debuted. (Jun 8, 2019)

The Sims 4: Island Living announced as the next expansion pack

After being rumored and leaked for a few weeks, The Sims 4: Island Living has now been officially announced by Electronic Arts as the next expansion pack for The Sims 4. Take your Sims to the tropical paradise of Sulani and make them experience many island activities such as swimming, sailing, sunbathing, exploring the ocean, enjoying the local culture, meeting up with mermaids, and more! Island Living will be released on June 21, 2019 for PC and Mac. (Jun 8, 2019)

SimGuruKate, the community manager for The Sims, announced that she is stepping down from her position. SimGuruFrost will take over as the new The Sims community manager. For more information, read the official announcement thread on thesims.com forums, or this news post on SimsVIP. (May 31, 2019)

After presenting mysterious numbers on Twitter, SimGuruLyndsay has confirmed that a whopping 350 new color swatches for various objects are coming to The Sims 4 in a future update, which could possibly be released this June. (May 25, 2019)

No patch for The Sims 4 in March

SimGuruKate has confirmed in Twitter that The Sims 4 PC, Mac and console versions will not get a patch in March. Patches are also released alongside content packs, which means there won't be a new game release in March either. (Feb 27, 2019)

The Sims 4: StrangerVille announced as the next game pack

The Sims 4: StrangerVille has been officially announced as the seventh game pack for The Sims 4. Move your Sims to the new mysterious world of StrangerVille, a rural desert town shrouded in secrecy that is full of creepy townies, weird weather, dangerous plants, and more. Immerse your Sim in unique and bizarre events, as they try to solve the mystery of this peculiar world. StrangerVille will be released on February 26, 2019 for PC and Mac. (Feb 20, 2019)

The Sims 4: Get Famous is out now!

The Sims 4: Seasons expansion pack is now available on Xbox One and PlayStation 4 versions of The Sims 4! (Nov 13, 2018)

The 73rd patch for The Sims 4 was released on November 13. The update adds terrain modification, a first-person camera, and the new Style Influencer career track, in addition to other added features and bug fixes. (Nov 13, 2018)

EA no longer providing free copies of The Sims 2

SimsVIP has reported that, as of October 11, EA customer support has stopped providing players with free copies of The Sims 2: Ultimate Collection. There have been no announced plans to offer Ultimate Collection for purchase, so as of now there is no legitimate way to purchase or acquire the compilation. (Oct 15, 2018)

New expansion with a celebrity focus

A short teaser on Twitter and other sources indicate a new celebrity-themed expansion pack, The Sims 4: Get Famous, coming out on November 16th, 2018. (Oct 8, 2018)

Terrain tools and Stylist career coming in The Sims 4 patch

In the first Maxis Monthly livestream, the SimGurus demonstrated terrain tools and a Stylist semi-active career to be added in an upcoming patch. The patch was originally announced for October, but SimGuruKate clarified on Twitter that it's being delayed for bug fixes. (Oct 2, 2018)

EA may add Sim disabilities to The Sims 4

In a series of tweets, SimGuruGrant (The Sims 4 producer Grant Rodiek) confirmed that EA is "actively pondering" the addition of mental and physical disabilities, including (possibly) the use of wheelchairs and sign language, to The Sims 4. SimGuruGrant stated that, if implemented, the disabilities would probably be "opt in" for players, and would be released as a free update rather than in a purchased pack. For more information about this, please see this post on SimsVIP.com (Sep 18, 2018)

As part of the most recent game update, EA has implemented some changes to The Sims 4 Gallery. This overhaul is "the first step to keep enhancing the Gallery to make it an incredible platform for this community to share its creations." (Jul 31, 2018)

Seasons for TS4 is coming to consoles

A SimGuru on Twitter has confirmed that The Sims 4: Seasons is a planned release for Xbox One and PlayStation 4 versions of The Sims 4. No additional details, including release date, have been announced yet. (Jul 29, 2018)

The Sims 4: Cats & Dogs expansion pack is releasing for Xbox One and PlayStation 4 versions of The Sims 4. EA has written a community blog detailing the features available to console players in the new expansion. The expansion pack will be available starting on July 31. (Jul 15, 2018)

The Sims 4 has been added to the list of games available on EA Access. EA Access is a paid subscription service on Xbox One that allows players to play certain EA games without buying them individually; EA Access also provides early-access exclusives and a discount on digital purchases for the Xbox One. (Jul 8, 2018)

The Sims 4: Seasons is out now!

The Sims 4: Seasons set for a "rolling release" at midnight

SimGuruNick has confirmed that The Sims 4: Seasons will have a "rolling midnight release," in the late evening of June 21 or early morning of June 22. The world's time zones have been grouped into five groups, each of which will have a release at or around midnight. The game will release at midnight local time in Eastern Australia, Central Europe, the Eastern United States / Canada, and in two other groups. (Jun 18, 2019)

EA has announced that The Sims 4: Parenthood game pack and The Sims 4: Kids Room Stuff stuff pack will be released for Xbox One and Playstation 4 versions of The Sims 4 on June 19, 2018. You can read the official announcement here (Jun 13, 2018)

A new trailer for The Sims 4: Seasons has been released, showcasing various holidays and how they function, along with more information on how players can create their own holidays. Click here to watch the trailer on YouTube. (Jun 7, 2018)

"What we know about The Sims 4: Seasons so far"

We've written up a blog post, detailing a lot of the information that we know (so far) about The Sims 4: Seasons expansion pack. It turns out, there's already quite a bit of information about this upcoming pack! If you're curious about what Seasons will have to offer, be sure to read the blog post, and don't forget to leave your comments and feedback! (Jun 1, 2018)

Seasons Q and As

Some SimGurus took to Twitter to answer fan questions about the upcoming Seasons expansion pack. SimsVIP has compiled EA staff responses to fan questions here and here. SimGuruKate has also opened the door to a larger Q and A via this tweet. (May 26, 2018)

The Sims 4: Seasons under development

My First Pet Stuff is out now!

The Sims 4: Jungle Adventure is out now!

EA has posted to the community update blog to celebrate The Sims' 18th birthday! (Feb 4, 2018)

Laundry Day Stuff is out now!

The Sims 4: Cats & Dogs expansion pack has been released! Cats & Dogs introduces pets to The Sims 4 for the first time, and includes the new world of Brindleton Bay, as well as new animals and the new vet clinic business. (Nov 10, 2017)

The Sims 4: Holiday Celebration Pack has been updated as part of the most recent game patch. Sims can now celebrate Diwali, the Hindu festival of lights. The update includes new Create a Sim assets, as well as nine festive objects. Holiday Celebration is a free downloadable pack for The Sims 4. (Oct 19, 2017)

No Mod or CC support for TS4 on consoles

SimGuruDuke on Twitter revealed that the upcoming The Sims 4 versions for Xbox One and Playstation 4 will not include support for mods or custom content. (Sep 28, 2017)

Laundry Day Stuff gets a name and an icon

The user-guided stuff pack previously known as "Eco Living Stuff" has been given the official name of Laundry Day Stuff after a vote. The upcoming stuff pack also has a new icon, also approved by popular vote. (Sep 13, 2017)

Toddler Stuff is out now!

The Sims 4: Cats and Dogs under development