Moving off freenode
freenode has been taken over by a hostile party (see this for an explanation) and has forcibly closed our freenode IRC channel on #wikia-sims. Additionally, they have wiped their entire services database, meaning that all nickname and channel registrations have been deleted.

Numerous projects and communities, including The Sims Wiki, have moved off freenode in response to these unacceptable measures. As of June 14, 2021, The Sims Wiki has no official IRC presence on freenode. Any channels you see there claiming to be part of The Sims Wiki are imposters.

Please join either the ChatLounge channel or the new Libera channel. 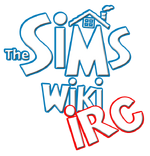 The Sims Wiki operates two IRC (Internet Relay Chat) channels that allow people to communicate with each other via live chat over the Internet. Almost any topic is up for discussion in the channels as long as it's not overly inappropriate.

Channels are maintained by an IRC contact, a trusted member of the community selected to handle channel affairs, as well as providing a link between the wiki and the channels. The current IRC contact is K6ka.

If you're new to IRC, see our Getting started page. If you are having issues connecting to IRC, you may ask for assistance on the talk page.

See how much fun we have in the channel by taking a look at the IRC quotes.

There is an official policy for the IRC channels. In short, use your common sense and treat others how you wish to be treated; this will help keep drama and conflict to a minimum, and maintain a comfortable atmosphere between users. If you happen to witness something you shouldn't, be sure to tell an operator via a private message.

To help protect the channel against abuse and still permit non-malicious users from being locked out, trusted regulars of the channels may be voiced (+). Voice carries no special privileges or permissions other than the ability to speak on the channel when it has mode +m (moderated) set. If you are voiced, it does not make you a "superuser" of sorts; it is only done because we feel that you can be trusted not to disrupt the channel maliciously. To be voiced, you must have a NickServ account and have spent some time in the channel. Once you are added to the channel access list, you will be automatically voiced by ChanServ whenever you join the channel.

IRC channels have separate access lists; thus, getting voice in one channel does not automatically grant you voice in another.

The wiki operates two IRC channels on two different IRC networks. They are technically separate from each other and are run on different servers. To connect to these channels, you will need an IRC client. IRC is not part of the HTTP protocol, so by default your web browser can't connect to IRC on its own. You can choose to download and install the listed clients below, or you can use the "webchat" IRC clients that run in your web browser listed under the appropriate section below.

The wiki's primary IRC presence is on the ChatLounge network, registered as #TheSimsWiki on irc.chatlounge.net. If you have an IRC client, click here to join #TheSimsWiki. If you do not wish to install an IRC client, you can use the webchat, which runs right in your web browser.

These users are channel operators on the ChatLounge channel; if you have any issues, you can query them.

The wiki also operates a second channel on the Libera network, registered as #TheSimsWiki on irc.libera.chat. If you have an IRC client, click here to join #thesimswiki. If you do not wish to install an IRC client, you can use the webchat, which runs right in your web browser.

These users are channel operators on the Libera channel; if you have any issues, you can query them.

These are bots that you may see on the IRC channels. Please remember that these are not humans.

Both IRC channels are connected to each other via Relay-TSW, an IRC relay bot that will automatically propagate messages sent in one channel to the other. The bot is provided by MrBenC. Unlike traditional relay bots, however, where the relay bot only relays messages, Relay-TSW will also relay the entire user list of the Libera channel to the ChatLounge channel, and will populate the ChatLounge user list with pseudo-users that correspond to the names they have on the Libera channel.

To put this into perspective, imagine the following scenario:

There are some caveats with this system, however:

The ChatLounge channel is also connected to the wiki's Discord server by Ultron_DC, an IRC-to-Discord relay bot. It functions like a traditional IRC relay bot and does not create pseudo-users due to the differences between IRC and Discord. Because the bot is not connected to the Libera channel, it relies on Relay-TSW to continue the relay to the Libera network. This creates an interestingly complicated system that consists of the following:

There are some caveats to this system of relaying messages: