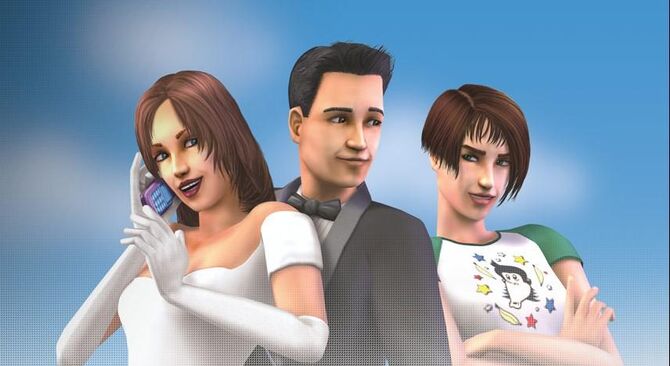 The Sims Life Stories
A game from The Sims Stories

The Sims Life Stories is the first game in the The Sims Stories product line, developed by Maxis and EA Games. It was released on February 6, 2007. Free trials of the game are available on certain laptops but they are only playable to the end of chapter 3 in Riley Harlow's story. Main characters in the game are Riley Harlow and Vincent Moore. The game is mostly about being directed to perform tasks that the player has to follow for their stories to unfold (Each story has 12 chapters). There is also a Free Play mode that has no story to follow. The game begins with Riley's story while Vincent's story is unlocked at the beginning of the fourth chapter of Riley's story. After you complete the stories you can continue to play as you wish.

The Sims Life Stories is the first release in an all-new game series called The Sims Stories. Play through all the great moments of your Sim's life in this easy-to-play, laptop-friendly version of The Sims. In the new and engaging directed Story mode, you take your Sims through a unique and entertaining storyline full of romance and dramatic twists. You even unlock cool rewards along the way as you achieve set goals. In open-ended Classic mode, you create Sims and then choose how they'll fulfill their dreams through life's biggest moments. Stay connected by using your own IM and email while playing.

Four Corners, where Riley's story takes place
Riley Harlow had been living in Sim City all her life, until she lost her job. Facing eviction, Riley turned to the one person she could count on, her aunt Sharon. Sharon had always been kind enough to help Riley out in a pinch, so Riley arranged to stay at her aunt’s house in the suburb of Four Corners until she was back on her feet.

Bitville, where Vincent's story takes place
Despite being the wealthy CEO of Jigantor Computing Networks, Vincent Moore has never been lucky in love. While on a business trip to Sim City, Vincent has overseen the finish of JCN’s biggest project to date: The SimSat 9000 Communications Satellite. The launch was flawless, the hands have been shaken and the bonuses are in the mail. Now Vincent eagerly returns to his modest mansion in Bitville to see his new girlfriend, Samantha Hayden. Samantha told Vincent she had a big surprise waiting for him when he got back. Perhaps Vincent's luck is changing...

Four Corners, a Free-Play mode neighborhood
In free play, there is no story to follow. You are free to play however you like! You can create single Sims or a family of Sims and move them in to the neighborhood, or you can choose a pre-made family. The choices are entirely yours to make, so enjoy free play and the neighborhood of Four Corners!

At first the player can only play Free Play or Riley's Story but, will get Vince's Story later on, as the player completes goals in Riley's Story. Four Corners, where Riley's story takes place and Four Corners, a Free-Play mode neighborhood are almost the same with slight differences in families and community lots.

The neighborhoods are only included with The Sims Life Stories and not in The Sims 2 but it is possible to copy the files from The Sims Life Stories (usually C:\Documents and Settings\User Name\My Documents\Electronic Arts\The Sims™ Life Stories or C:\Users\User Name\My Documents\Electronic Arts\The Sims™ Life Stories) saved folder to The Sims 2, though this only works if the right games are installed (University, Nightlife and Family Fun Stuff). The player won't have the objects, floors and walls from Life Stories, though. There used to be a pack for Sims 2 that contained them at ModTheSims but it was removed by the request of EA.

The main character of Riley's Story. She moves in to her aunt's house in Four Corners after losing her job and being evicted from her apartment in Sim City. On her first day she moves in, her Aunt Sharon almost immediately has to leave for something urgent, thus leaving Riley alone for the first few days. Meanwhile, she makes friends with the neighbors who come to welcome her to the neighborhood, and falls in love with a guy named Mickey Smith.

A party DJ and also Riley's love interest during the story. He asks Riley to be his girlfriend and she accepts. The relationship goes well until he discovers she is seeing Dylan. He has a fight with Dylan and loses, causing him and Riley to break up. However, during his engagement to Agora Tchotchke, he and Riley reconcile. He almost gets married to Agora until Riley arrives at the scene to halt the wedding, after that he proposes to Riley and they get married. They have a child together (sometimes twins) at the end of the story.

Riley's best friend who gives her a coffee maker as a housewarming gift. She is the one Riley trusts and acts as the provider of information about the neighborhood to her. She also attends Mickey and Agora's wedding and calls Riley to attend as well. She is a widow and the mother of Madison Fortuna.

Riley's ex-boyfriend from high school who tries to patch things over with her. He has moved in 2 weeks before Riley has done and currently works at the Four Corners Bank. He goes to Riley's house for dinner with her and they have a great time. He also appears to comfort Riley after she breaks up with Mickey and he is found to be cheating on her when he is caught dating Ashley Sinclair. Later it is revealed that he and Agora have attempted to start a plot to kidnap Sharon in order to claim her vast fortune and use Riley who as a relative can claim the cash. He is arrested for doing this. At the beginning of the story, he is the driver for Aunt Sharon and truly loves her.

Archenemy of Riley who works as a party DJ. She also has a romantic interest in Mickey, hence fuels the jealousy towards Riley. She kidnaps Sharon at the bank with Dylan to claim her million Simoleons. Towards the end of the story, after she admits that she has done it to marry Mickey and share the money with him, she is left at the altar and arrested.

Riley's aunt who lives in Four Corners. She offers Riley her place to stay but leaves abruptly for something important. She is later found kidnapped by Dylan and manages to escape from him. She later passes on her home to Riley and at the end of the story is revealed to be a self-made millionaire who made her fortune in the stock exchange.

Co-worker of Dylan who attends Mickey and Agora's wedding. She is also seen dating Dylan and gives a gift to Riley after her wedding. She is the wife of Waring Sinclair.

Minor character in the story. She is the daughter to Fiona Fortuna and only appears as a guest at Mickey and Agora's wedding. She is in love with Jacob Margison.

Husband of Ashley and a minor character in the story who only appears at Mickey and Agora's wedding. Waring is a successful businessman who fears that his wife will cheat on him.

A rich business tycoon who lives in Bitville and the main character in Vincent's story. He breaks up with Samantha Hayden after he feels that her wedding proposal was far too sudden. After a string of disastrous dates, he falls in love with Naomi Hunt, whom he meets at Baliwood Star Lanes.

A barista who works at Baliwood Star Lanes and also Vince's love interest. They first date at Cliffside Park and the date goes well until a mysterious woman (Kendra Blaise) flirts with Vince and Naomi incorrectly assumes that Vince is a womanizer. Later, she gives Vince a second chance and their relationship improves. At the end of the story she moves in with Vince and is crushed by a satellite, after that her fate is up to the player.

Vince's girlfriend at the beginning of the story who is only dating Vince because of his fortune. They break up after she proposes marriage after only three weeks of their relationship. Subsequently, she harbors a bitter relationship with Vince after he sells all of the stuff she bought for the wedding. She secretly sabotages all of his dates and later on in the story vents out her anger by destroying his house. At the end of the story, Naomi provokes her into a fight.

Vince's best friend who is asked to take care of his house during his absence. However, he leaves Vince's house in a big mess, later on in the story he begins to develop a relationship with Alexa Starr.

Vince's friend and co-worker. He provides information on the JCN satellite's progress and some other important plot details. He is depicted as a stereotypical nerd, and has a larger vocabulary (he often says Latin phrases) than other the characters which often makes it hard for them to understand him.

Vince's business rival and later Samantha Hayden's new boyfriend turned husband. At the end of the story his business fails and he and Samantha split up. He is also a loser who can't win a fight.

One of Vince's dates. They dine at Don Calamari's for their date. However the date turns disastrous when (unbeknown to Vince) Samantha sneaks into the kitchen and sabotages the food causing Alexa to fall asleep on her food. She tends to interrupt during conversations and has an addiction to Coffee.

A mysterious lady who is paid by Samantha to claim she had a great date with Vince and sabotage his date with Naomi. She is described as a pyromaniac firefighter.

Materialistic young woman who is one of Vince's dates. They shop at the Arcadium Plaza during their date and Vince realizes that she is only after his fortune.

Vince's friend whom he introduces to Sasha after their date.

Owner of Don Calamari's and a friend of Vince. He gives Vince a gift as an apology to the incident that happens during Vince and Alexa's sabotaged date.

Story Mode from The Sims 2 is replaced with Family Journal

Wallpaper for The Sims Life Stories.
Add an image to this gallery 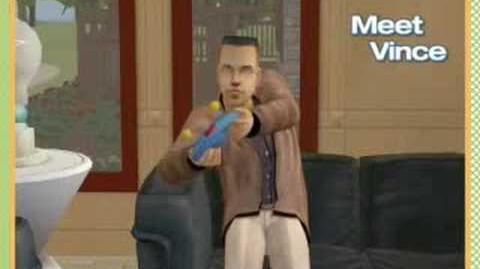 Retrieved from "https://sims.fandom.com/wiki/The_Sims_Life_Stories?oldid=884716"
Community content is available under CC-BY-SA unless otherwise noted.