The Sims Castaway Stories
A game from The Sims Stories

Not to be confused with The Sims 2 Castaway.

The Sims Castaway Stories is the third game (and the last) in the spin-off series, The Sims Stories, developed by Maxis and EA Games. The plot circulates around a group of Sims who survived the sinking of Queen Solomon. The game consists of 24 chapters (unlike the other The Sims Stories games), and the player can choose the character with whom they will play the game, or create a custom one.

This time your Sims have washed up on a tropical island!

Help them make a new life in an unexplored paradise in this easy-to-play, laptop-friendly version of The Sims. The Sims Castaway Stories features two great ways to play. In the new and engaging directed Story mode, explore the island, build a shelter, learn to find food, and make your Sims' lives as fun and comfortable as possible. You even unlock rewards along the way as you achieve set goals.

Shipwrecked and Single
Very little is known about this remote tropical paradise. Its location isn't recorded on any chart or map. Wild animals prowl it's dense jungles, from the ominous volcanic crater to the wide sandy beaches. Lost and alone, can you survive long enough to find other castaways and meet Island Natives?

Wanmami Island
Wanmami Island is home to the local, the lost, and the long-range mariner. Rising majestically out of the vast blue ocean, the island looks inviting enough. There are numerous suitable places to make camp, and nothing particularly dangerous or ominous is visible from the water. The natives named it "Wanmami" after the fevered whimpering often heard from shipwreck survivors washed ashore on the beach.

In The Sims Castaway Stories, Buy mode has been renamed to Barter mode. It is very similar to Buy Mode, but objects are categorized only by function.

Objects in Castaway Stories blend in with the island theme, and a lot of objects from The Sims 2 base game are featured, but with a new tropical design. Objects are separated into 12 categories: Survival, Seating, Surfaces, Beds, Mirrors, Lighting, Cooking, Plumbing, Storage, Nature, Decorations and Fun.

Build Mode is mostly the same, though it has a few new categories, such as Resources. Some features (for example, swimming pools) have been removed.

The time system has been changed in Castaway Stories. While Sim minutes and Sim hours still exist, they are invisible. Instead, 8 orbs replace the standard time bar. Each orb represents 3 hours. A day lasts 5 orbs (15 hours) while night lasts 3 orbs (9 hours).

Resources replace Simoleons in the game. They are represented by colored rocks, which can be seen when a Sim pays for something on a community lot. Resources are neccessary when purchasing or crafting objects. They can be obtained in many ways, such as collecting various debris or getting a job in one of the three career tracks.

Food is an important feature of the game. Food points are needed to prepare any meal, and are therefore integral to a Sims' survival. Players can know how many food points a household has by checking the food bar in the lower left corner of the user interface. The number it shows is the number of food points the household has. Food can be obtained in many ways, such as gathering fruit or spearing fish.

Certain objects in Castaway Stories depend on either plumbing or electricity in order to work. These are, for example, electric ovens and fridges or toilets and bathtubs.

A water tower must be placed on the lot in order for bathroom objects to work, while an electric generator (a story reward object in the game) must be placed for objects depending on power to work.

Weather is carried forward from Seasons, but it has a few changes. Firstly, snow has been removed. Secondly, there are no specific seasons in the game. There are periods of sunny weather, as well as periods of rainstorms, hailstorms and thunderstorms. The player can place a lightning rod on the lot which will reduce the chance of a Sim or tree being struck by lightning. The weather can be controlled by using the "Ignis Ex-Machina", a story reward object in the game that is identical to the Weathernaught 57X from Seasons.

Castaway Stories introduces new animals which can be kept as pets in the game: hyenas and orangutans. While jaguars also exist in the game, they cannot be obtained unless mods are used.

Hyenas are the equivalent of dogs. Hyenas have the same needs as dogs in The Sims 2: Pets and The Sims Pet Stories do, and can basically do everything a dog can, except get a job. Essentially, they are dogs with a special skin. They can be found on community lots.

Unlike hyenas, orangutans are fully controllable and can get jobs. They have all Sim needs, except Environment and Comfort. Orangutans don't breed and never die. They have a variety of unique interactions, such as "Play... Stick 'Em Up!" or "Groom". They are also found on community lots, but can be summoned when a monkey tree is placed on the lot.

Other than these three animals, the game also features penguins, skunks, pet parrots and other minor species.

Since Felicity Island and Wanmami Island are roadless neighborhoods, taxis have been removed. Instead, Sims travel through the island via maps and portals.

Maps are unlocked in Story mode. A map displays every community lot in the neighborhood. When one is chosen, the Sim will automatically go to it.

Every lot, residential or community, has at least one portal on it. Usually, there are more portals on community lots, and a portal will lead the Sim to a specific lot. There is only one portal on a residential lot; when it is clicked on, a map will appear which allows the player to select a community lot for the Sim to visit. Portals don't have any new animations, but they have a few designs.

There are three careers in The Sims Castaway Stories: Hunter, Gatherer, and Crafter, each with a different general ratio of food to resources. Food is the amount of fish, coconuts, bananas, and papayas the player's Sim family has collected. Resources are the castaway version of simoleons and are used for build mode, barter mode, and buying on community lots. As in the The Sims 2, castaways receive chance cards while they are working, which can affect their career level and skills. Unlike any of the other The Sims games, in this game every career and level in that career starts and ends at the same time, although there are some differences between Adult, Teen/Elder, and Orangutan career times.

The following is a list of sim characters encountered in the game that have story significance.

One of the mechanics for the Solomon Queen, who mainly took the job so he could go to Club Meet your Mate. He was one of the two characters who could be chosen as the protagonist at the beginning of the game.

A writer who recently took an offer to write an article in "Going Places" magazine. Little did she know she wasn't "Going" to Club Meet your Mate. She was one of the two characters who could be chosen as the protagonist at the beginning of the game.

The orangutan the main character adopts as a pet. Initially, she is not very kind to the main Sim for attempting to take the tiki idol, but eventually she agrees to stay with them.

A jaguar that guards one of the paths at The Crossroads.

A survivor from the Solomon Queen. She has a huge crush on Robby, and in the end she follows Robby's decision to remain on the island.

A survivor from the Solomon Queen. Greedy and manipulative, he takes over Shady Lagoon, the main character's secondary residence, without hesitation.

A survivor from the Solomon Queen. She is portrayed as a ditsy and daring young lady, who also loves to garden, and has a husband back home in the city.

A survivor from the Solomon Queen. He loves to have fun constantly, and loves pranks and jokes. He eventually decides to stay on the island with Emma Langsford.

A survivor from the Solomon Queen. She seems to have a slight interest in Hugh and is very homesick.

An old scientist who has done extensive research on the island, hence his vast knowledge about the island's history and culture. Initially, he is very helpful to the main character and the other survivors, but as the story continues, his true intentions are revealed. In the end, his ultimate fate is in the player's hands.

The Chief Engineer of the Solomon Queen. He is the only survivor found on Volcano Island and is dying when the main character finds him. In his final breath, he reveals the truth about Professor Rhinehart.

The Chief's guard. He serves as the messenger between the Manave family and the main character. Doesn't have a home, choses to be a nomad so that, "his prey won't get familiar with his scent."

The daughter of the Chief and Huhana. Mischievous and playful, she is being chased by a pack of wild hyenas when the main character meets her.

The Chief and father of Nanihi. He welcomes the main character to the tribe's Volcano Festival as an honorable guest.

The Chief's wife and mother of Nanihi. She weaves the main character a sail as a kind gesture for saving her daughter's life.

One of the villagers in the Village Market. He needs help fixing the exercise machines as he is not a skilled repairman.

One of the villagers in the Village Market. She wants the main character to light the trash pit for her.

One of the villagers in the Village Market. She has a bad memory and is longing for a Singing Stone from Scavenger Fields.

One of the villagers in the Village Market. He is seen painting at the easel and would like to have company to play chess with.

One of the villagers at the Village Harbor. He is Rainui's younger brother and needs a hand in spearing fish.

One of the villagers at the Village Harbor. He wants to have a jar of fireflies to use for a light at night.

One of the villagers at the Village Harbor. She is Ahio's bossy sister and wants someone to push her on the swing.

One of the villagers at the Village Harbor. She doesn't know how to play an instrument and wants the main character to play something for her.

Comparison to other games in The Sims series[edit | edit source]

Many of the cheats found in the Sims games, as well as custom content that modifies game behavior, will not work in this game. However, some cheats do work, and most new meshes and recolors will work.

The Sims Castaway Stories was generally well received. GameRankings has an average score of 77% based on 7 reviews, while MetaCritic has a score of 73%. PC Gamer (US) gave the game an 83%, praising the low system requirements, the music, the original setting, as well as the low retail price, but noting that there are a few bugs and long loading times. IGN gave the game an overall score of 7.3 out of 10, stating "The Sims Castaway Stories is the first game in the entire series that really feels different despite being based on the same engine and principles", but also saying that there is little to no replayability. Some critics enjoyed the game less than others, however. PC Zone said "By peddling this sort of single-minded crud to children EA are creating a new generation of absolute morons who won't be able to think one step ahead of themselves."

Mata, a jaguar in story mode 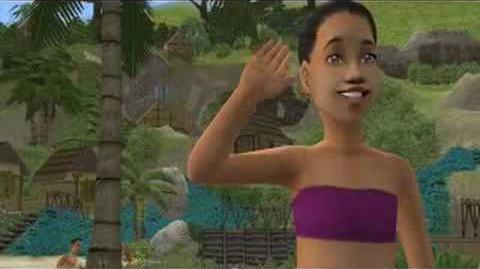 Retrieved from "https://sims.fandom.com/wiki/The_Sims_Castaway_Stories?oldid=941625"
Community content is available under CC-BY-SA unless otherwise noted.