The Sims Wiki
Register
Don't have an account?
Sign In
Advertisement
in: Games, Bustin' Out, Console games in The Sims series
English

The Sims Bustin' Out (handheld)

For the console version, see The Sims Bustin' Out (console).

The Sims Bustin' Out is the first title in The Sims handheld series. This version of Bustin' Out was released for the Game Boy Advance and the N-Gage in the fourth quarter of 2003. As the title suggests, Sims can get out of the house to visit other locations. Unlike most other games in the series, this game isn't a life-simulation; it's now an adventure game. The handheld version of The Urbz: Sims in the City serves as its sequel.

The Game Boy Advance version puts the player's Sim in a place called "SimValley" for summer holiday. Like the console version, GBA version gameplay is objective-based - every time the player completes a series of tasks, the game is allowed to progress. In this game, there are no furnishing objects to unlock. Instead, the player unlocks new houses by progressing through the story missions.

Deviating from the "point-and-click" selection process heretofore used in most Sims titles, this version allows the user to control their Sim directly, using the GBA's directional pad.

There are various locations Sims may visit throughout the course of the game. As Sims advance through the game, new areas become accessible, and new mini-games may be unlocked in certain areas.

The Sims Bustin' Out for handheld features a wide variety of characters, whom the player may improve their relationship with by choosing the correct dialogue.

These are major characters who play an important role in the story. They cannot be your roommates.

These characters are less important to the overall narrative, however they are still fully interactable and can become roommates with your Sim.

Create-a-Sim opens onto the Name Your Sim screen, which presents the player with a keyboard which can be used to enter their Sim's name. This name must be eight characters or less.

Once a name has been chosen, one is able to customise their Sim's Appearance. This includes: Gender, Skin Tone, Hair Style, Hair Color, Shirt Color, Pants/Skirt Color, and Shoes color. Pants are limited to men, whilst Skirts are limited to women. The number of choices available for each option are minimal, most noticeably with Skin Tone, which only presents the player with three choices.

After this, the player decides on their Sim's personality. This is done in the same way as The Sims, with the player allocating 25 personality points between 5 different traits (Neat, Outgoing, Active, Playful, and Nice), all of which allow for a maximum of 10 points to be assigned to them.

The personality that a player gives their Sim will determine how well they get along with the various Sims around them, as a Sim conversing with an NPC of a compatible personality will receive one or two bonus points when performing a positive interaction.

Your Sim's zodiac sign can be chosen on the Personality page. It is independent of the personality you give your Sim, and its only use in-game is in determining which secret Zodiac items appear to your character. Other Zodiac items can only be attained via Gamelinking with a friend whose Sim has a different Zodiac sign, and trading via auction.

The Name Your Sim screen. 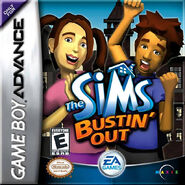