The Sims Wiki
Register
Don't have an account?
Sign In
Advertisement
in: Games, The Sims 4, Game packs, Werewolves (The Sims 4)
English 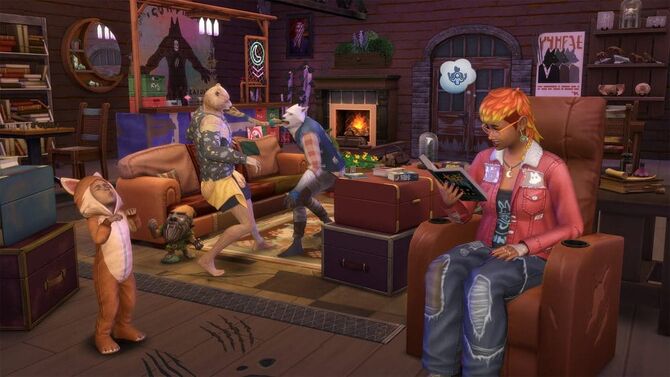 The Sims 4: Werewolves
Game pack for

The pack reintroduces the werewolf life state to the game, in a similar manner to The Sims 2: Pets and The Sims 3: Supernatural. It also adds the new world of Moonwood Mill.[1]

Embrace your transformation. Howl the night away in The Sims 4 Werewolves Game Pack! Your Sims will transform, join packs, and run wild under the light of the full moon. Explore the world of Moonwood Mill and discover the secrets of the werewolves as you navigate your new lycanthrope life. Sims will unlock new abilities, manage new temperaments, and maybe even meet their fated mates.

Life on the Wild Side – What big teeth you’ll have! Transform into a werewolf and embrace (or fight) your animalistic nature. Beyond rocking a fearsome form werewolf Sims will have unique temperaments and abilities, be affected by the phase of the moon, and experience wolf-specific life events.

Alpha or Lone Wolf? – Craft your werewolf identity. Were you bitten, or were you born into a werewolf family? However it happened, now you’ve got to decide what kind of wolf you want to be. Find a pack to prowl the night with, meet your fated mate atop Howling Point, or shun all that and try to make it as a lone wolf.

Lycanthrope Lore – There’s a lot to learn about werewolves and their origins. Unravel werewolf, vampire, and spellcaster lore as you read books, discover secret tunnels, grow your collection, and interact with denizens of Moonwood Mill.

A group of werewolves, from the trailer.

A werewolf using a telescope.

A werewolf teaching a toddler to howl.