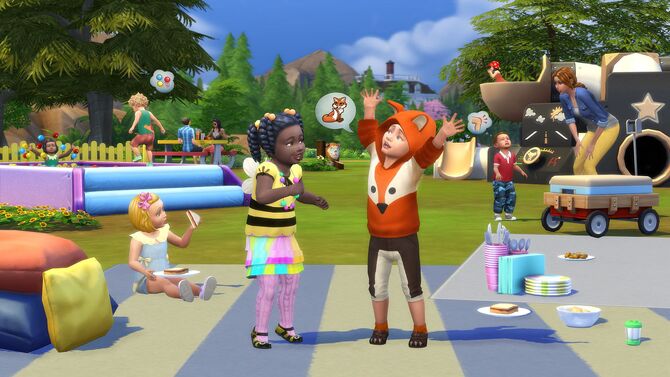 The Sims 4: Toddler Stuff is the twelfth stuff pack[note 1] for The Sims 4.[1] The stuff pack's development was confirmed by Maxis' "Third Quarter Teaser" video. The teaser video stated a release date of "Late Summer" in 2017.[2] The trailer and blog post[3] confirmed the title and announced the release date as August 24, 2017. The console version was released on May 22, 2018.

Play on the toddler playground!

Give your toddlers new ways to express their personalities, burn off energy, and make friends with The Sims™ 4 Toddler Stuff. Dress your little Sims in a variety of adorable outfits and cute hairstyles. Use colourful décor to build an outdoor play space where toddlers can enjoy the slide, crawling tunnels and ball pit with friends.

Dress in adorable apparel. Express your toddlers’ personalities with new boy and girl fashions and hairstyles. Choose from a variety of tops, bottoms and shoes that showcase their unique style. Dress in whimsical outfits from butterfly-winged tees to animal hoodies, even rainbow moccasins.

Jump into fun. Toddlers can burn energy while having fun on the collection of playground objects. Tiny Sims can hop into the ball pit with a buddy, scoot down the slide or scamper through colourful tunnels. With a little imagination, toddlers can make-believe that they’re pirates or space-exploring astronauts!

Host play dates. Build the perfect play space in a local park or backyard, then invite the neighbours over for a play date! Toddlers can make friends and let loose while parents facilitate the fun, tell stories, and grill up the kids’ favorite foods.

Retrieved from "https://sims.fandom.com/wiki/The_Sims_4:_Toddler_Stuff?oldid=922393"
Community content is available under CC-BY-SA unless otherwise noted.