The Sims Wiki
Register
Don't have an account?
Sign In
Advertisement
in: Games, The Sims 4, Expansion packs, Snowy Escape
English 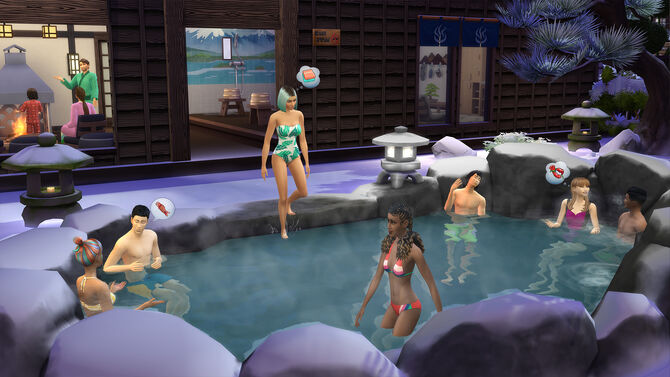 The Sims 4: Snowy Escape is the tenth expansion pack for The Sims 4. It was announced on October 19, 2020, and its trailer premiered the next day.[1] It was released on November 13, 2020 for all platforms.

This expansion centers around activities such as snowboarding, skiing, sledding and mountain climbing, as well as the new lifestyles game mechanic. It includes Mt. Komorebi, a snowy, Japanese-inspired mountainous world featuring new types of weather. Owning The Sims 4: Seasons is not required to play the pack.[2]

Chase Your Thrills – Test your Sim’s skill and endurance with activities on the mountainside! Grab skis for a downhill ride, strap on a snowboard to shred, or bundle up on a sled with another Sim. Prefer going up? Build their rock climbing skill and challenge your Sim to reach the mountain peak during daring, sometimes dangerous, excursions.

Find Your Zen – Let your Sim’s worries float away in the natural hot springs, then unwind over hot pot around the kotatsu table or socialize while hiking through bamboo forests and snowy terrain. Bask in the serenity of mindful walks and soothing music to take control of your emotions and discover your inner zen.

Create Your Sanctuary – Whether you prefer the traditional details or modern touches of Japanese-inspired furniture and decor, you can incorporate shoji doors, windows and screens, tatami mats, and more to design a home that complements your life. Take your shoes off at the genkan entryway in the soft glow of paper lanterns overhead, or build your own rock garden outside!

Define Your Lifestyle – Unlock new personality and relationship effects with the introduction of Lifestyles and Sentiments. Lifestyles manifest in response to your Sim’s actions and habits, changing their behaviors appropriately. Similarly, shared experiences inspire Sentiments and have a lasting impact on Sims’ relationships to each other, affecting their social interactions.

The expansion features the world of Mt. Komorebi - a snowy and mountainous region with Japanese-inspired architecture based on two Japanese islands, Honshū and Hokkaido. It has both residential homes and rental lots, allowing Sims to both live and vacation there.[3] With the pack's associated base game update, Sims are also able to vacation in any other residential world.[4]

This pack also features a new game mechanic called lifestyles. These work similarily to traits, however they are acquired through normal gameplay by exhibiting certain behaviors. Lifestyle traits gives Sims various emotions or gameplay elements that provides more in-depth personanities for Sims. Lifestyles will have to be maintained otherwise they will be lost or replaced with another lifestyle trait. The pack includes 16 lifestyle traits.

These Sims seek out new and unique experiences!

These Sims tend to disapprove of other Sims' improper behavior such as Mean or Mischievous socials, but find themselves happier in Formal Outfits and have a much easier time with Friendly and Romantic socials.[5]

There has been a controversy surrounding the depiction of Japanese culture in this pack. In the reveal trailer, a Sim is shown bowing at a shrine, and another Sim is shown wearing a robe which has a design that resembles the war flag used by Japan during World War II. South Korean players have found these depictions offensive, as they relate to the colonization of Korea by Japan. Koreans were historically forced to worship Japanese shrines under Japanese rule.[6]

On October 23rd, SimGuruGraham announced that the trailer had been edited to not show the shrine worship. The developers have also removed the bowing interaction from shrines and edited the design of the robe shown in the trailer.[7] 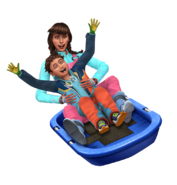