The Sims Wiki
Register
Don't have an account?
Sign In
Advertisement
in: Featured Articles, Games, The Sims 4,
and 3 more
English 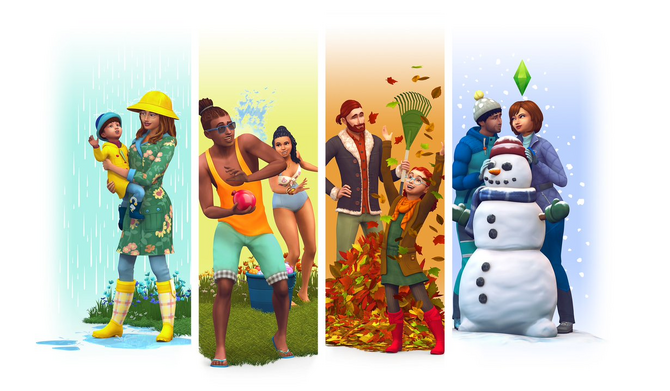 The Sims 4: Seasons
Expansion pack for

The expansion pack reintroduces weather and seasons, along with other new features such as holidays, temperatures, new careers and new skills.

Year-round fun for your Sims

Add weather to your Sims’ lives to tell new stories, enjoy seasonal activities and celebrate heartfelt holidays with The Sims™ 4 Seasons. Make the most out of the weather all year round, from crisp snowfalls to sweltering heat – every world is affected by seasons in unique ways. Create a winter story with ice skating, befriend a magical scarecrow at the fall harvest, share a spring fling during a downpour or host a summer pool party. Gather friends and family to celebrate holidays complete with traditions, gifts and special guests. Stay warm or keep cool with all-new outfits to brave the elements. Even begin a blossoming gardening career as a botanist or by crafting floral arrangements!

Experience impactful weather. Enjoy four stunning seasons and dynamically changing weather that affects all aspects of your Sims’ lives. From hot and sunny to blustery and snowy, every world’s climate is unique and impacts your Sims’ choices, relationships and daily activities. Control the elements to summon thunderstorms, clear up overcast skies or jump between seasons.

Revel in seasonal activities. Year-round activities provide Sims fun and entertaining ways to enjoy the seasons. Bundle up to build a snow pal with friends, create snow angels or perform cool tricks at the skating rink. Toss on a raincoat to splash in a spring shower and explore the outdoors to earn badges as a scout. Dress Sims in new swimwear to cool off in the sprinkler or play in the kiddie pool. Harvest honey in the fall, play in leaves or have child Sims make homemade holiday crafts.

Celebrate the holidays. Decorate your home and bring Sims together to celebrate heartfelt holiday traditions. Ring in the new year with a celebration, enjoy a romantic date during Love Day or gather the family for a bountiful harvest feast. Watch as your Sims count down the calendar days until Winterfest, where presents are gifted, decorations are hung, and Father Winter pays a visit. You can even create custom holidays and choose how your Sims celebrate.

The Sims 4: Seasons introduces weather and seasons as its primary core mechanics. The various new forms of weather allow Sims to live their everyday lives in brand new ways. The four seasons of spring, summer, fall and winter also shape the entire lives of Sims, allowing for new activities, festivities and more. During summer, heatwaves and hot temperatures are prominent, while in winter snowfalls are an everyday occurrence alongside freezing temperatures. Spring and fall are the seasons with heavy rainfalls and either cold or warm temperatures, depending on the season.

All worlds have their own unique climates with different weather patterns, including rainy, cloudy, sunny and snowy. During rainfalls Sims are able to jump on water puddles created by the rain, or save money by taking showers in them outside. Rainy weather mostly happens during spring and fall, but is also probable during summer. Thunderstorms may appear as well, giving Sims scared emotions and lighting all over the neighborhood. Snow is the equivalent of rain during winter and usually happens when the temperature reaches cold. Snow will land on the ground, roofs and outdoor furniture and Sims can create snow angels and snowpals. Cloudy and sunny weather appear on all four seasons and usually only have environmental changes. Worlds also have different weather for their current season. For example, in Oasis Springs there might be no snow in winter, while Willow Creek would be covered in snow.

Temperatures are another big mechanic introduced in The Sims 4: Seasons. Temperature adapts to the current weather and season, and have various effects on the environment and Sims themselves. When temperatures become too hot, Sims will start wearing their hot weather clothing, or else they will die from overheating. Heatwaves are also prominent during summer, that are deadly to Sims who are not prepared. During winter, cold temperatures tend to happen, with the opposite effects of hot temperatures. Sims will start wearing their winter clothing and fishing, for example, becomes unavailable.

Holidays in The Sims 4: Seasons are very customizable. They are worldwide events that repeat each year, and each come with their own set of traditions which define the way the Sims celebrate the holiday. There are multiple pre-made holidays, and players are able to create their own or edit/delete the pre-made ones. Holidays begin at 6:00 am and end at 2:00 am of the next day. When the holiday ends, Sims will get a happy or sad moodlet, depending on how many traditions they completed. Surprise holidays will occasionally pop up in Sims' calendars a few days before they occur, such as "Talk Like a Pirate Day".

Traditions are the main core feature of holidays and they come in various forms. Each holiday can have up to 5 different traditions and they determine how a holiday is celebrated. The traditions vary from eating a grand meal to partying, appreciating things and singing together. Each holiday can be assigned a decoration theme, which will allow the current household to choose from appropriate decorations to place on the outside of their house, via the "Attic Shack Decoration Box" (which can be bought in build mode). Neighboring houses will automatically be decorated when a holiday starts, unless the theme is set to "None".

The calendar is also featured in The Sims 4: Seasons and instead of being an object, it is an embedded feature located next to the phone icon on the live mode user interface. The calendar includes the upcoming weather forecasts, days, birthdays and the four pre-made seasonal holidays alongside the ones created by the player. Players can add custom holidays, delete or edit pre-loaded ones, or manually replicate them so that they occur on a different date.

Players can also use the calendar to schedule various social events and invite other Sims to such. Players can specify both the date and time of the event. To aid players with scheduling events, the calendar will show when the household Sims will be at work and school.

The calendar was later added to the base game with patch 115 along with some improvements, such as the ability to favorite and sort events, festivals and holidays.

Sims with Heat Acclimation aren't affected as much by hot weather, but can still feel the effects.

Sims with Cold Acclimation aren't affected as much by chilly weather, but can still feel the effects.

Waterproof Sims do not get wet in the rain.

A teaser from before The Sims 4: Seasons was officially announced.[4]

The menu screen, when Seasons is the latest installed content pack. 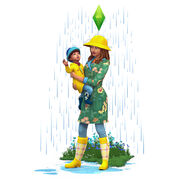 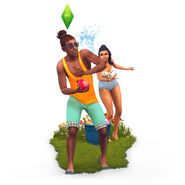 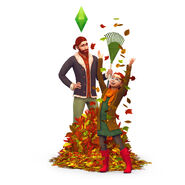 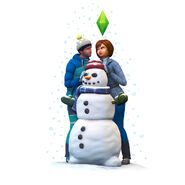 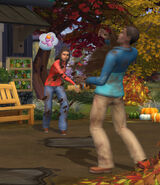 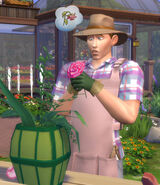 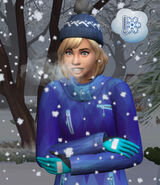 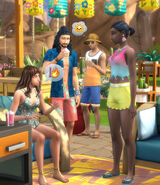 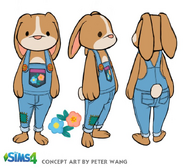