The Sims Wiki
Register
Don't have an account?
Sign In
Advertisement
in: Games, The Sims 4, Stuff packs, Paranormal Stuff
English 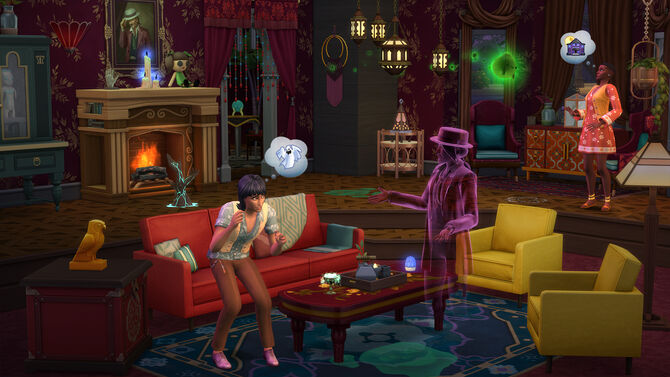 The Sims 4: Paranormal Stuff is the eighteenth stuff pack for The Sims 4. It marks the introduction of the medium skill, the paranormal investigator freelance branch, haunted houses as well as the return of the Bonehilda NPC to The Sims series, previously found in The Sims: Makin' Magic and The Sims 3: Supernatural. Its trailer premiered on January 12, 2021 and was released on January 26, 2021 for PC and consoles. The pack's theme and contents were derived from the "happy haunts" theme from the second community stuff pack vote.

Light the candles and prepare the rituals to appease your ghastly new roomates in The Sims 4 Paranormal Stuff Pack! Spectral guests cause mischief and mayhem on Haunted House Lots, but Sims can perform a seance, befriend Guidry the Ghost, become a Paranormal Investigator, and restore order.

Meet Ghastly Roomates – Your new-to-you home might be home to someone else, too, if it’s one of the new Haunted House Lots! Appease the mischievous specters to relax in serenity, or let them run amok for scares day and night.

Cleanse Your Home – If you want to send your new roomates packing, Guidry the Ghost is happy to advise you. Remove accursed objects, perform a seance, communie with the dead, and receive gifts from specters! You can even summon Bonehilda the skeletal maid.

Calm the Spirits – Master the Medium skill and impress Guidry to get a Paranormal Investigator license! Once you’re ready, take on some freelance gigs to expel unwelcome visitors for other Sims. With spooky activity on the rise, it’s up to your Sim to put a stop to it.

This pack features a new lot type under residential lots called a "Haunted House". This is different to the spooky lot trait in that haunted houses have a host of additions coming from specters who regularly appear at night, specters at first will be friendly and will start have their moods lowered when not interacted with for a long while or failures when contacting them. When the ghosts do get sad or angry, Sims living in the house will get scared more often and possibly be attacked by mischievious specters. Sims can ask for help from Claude René Duplantier Guidry on how to deal with specters and how to have an easier time living with specters.

This is similar to the Ghost hunter profession introduced in The Sims 3: Ambitions. Sims who are skilled mediums can acquire a license to become a paranormal investigator and exorcise unwanted specters from other homes. This comes in three difficulty settings and involves multiple ways of trying to get rid of specters. After completing the gigs, Sims will earn money and sometimes spooky gifts that can help with specters of their own.

Sometimes living in a haunted house, playful specters will cause messes or make Sims too scared to cook food, this can be solved by summoning Bonehilda to help cater for the house and prepare food, making her a no-charge maid. When she's done Sims can befriend her and hang out with her.

The pop up that appears after the pack is installed.

Pre-made house, made by Doctor Ashley, players can place in their worlds. 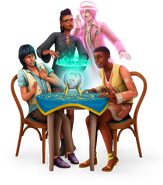