The Sims Wiki
Register
Don't have an account?
Sign In
Advertisement
in: Games, The Sims 4, Game packs, My Wedding Stories
English

The Sims 4: My Wedding Stories 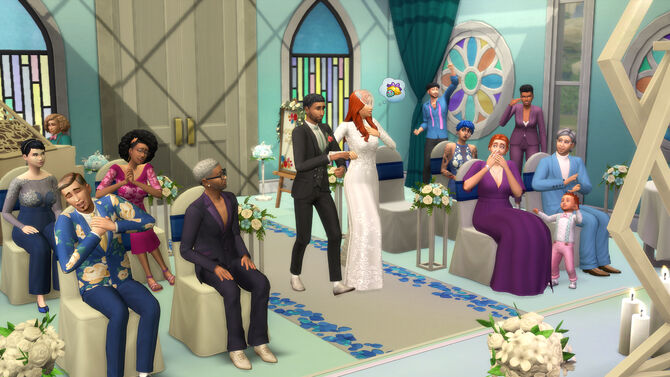 The Sims 4: My Wedding Stories
Game pack for

The Sims 4: My Wedding Stories is the eleventh game pack for The Sims 4. It was released on February 23, 2022.[1] The pack adds various updates and improvements to weddings, with themes similar to The Sims 2: Celebration! Stuff and The Sims 3: Generations. It also adds the Mediterranean-inspired residential world of Tartosa.

Take a trip down the aisle in The Sims™ 4 My Wedding Stories Game Pack! Make your Sim’s journey to their big day special, then plan the perfect ceremony. From the proposal to the reception, customize each aspect to celebrate every Sim’s love story in a way that truly feels unique to them. In the world of Tartosa, (almost) anything becomes romantic.

Prep to Party – Popping the question is just the beginning of your Sim’s wedding experience. Once they’ve said yes, the excitement and nerves set in—there’s so much to plan! Choose the Sim of Honor to make the journey to the altar as fun as possible. Then, bring on the engagement dinner, rehearsal, and a last single night out to remember.

Bring Your Vision to Life – Get into the details of upcoming nuptials as Sims select their wedding day attire and everything else they’ll need for the big moment: menu, decor, schedule… all of it! Tour venues designed by community creators as Sims try cakes, consider flowers, and settle on the traditions that will make their day most meaningful.

Tie The Knot – Before the main event, celebrate with family at a rehearsal dinner. When it’s finally time, feel the love and live out every fantasy. Exchange vows, rings, and kisses at the altar before the real celebration starts. Kick it off by serving tea for the family, or head right to the reception. Newlyweds and guests alike can dance with loved ones, while the new spouses cut the cake, give toasts, and receive well wishes.

Upon the game's announcement a statement by EA was released which announced that My Wedding Stories would not be available for sale in Russia due to its censorship laws against the LGBTQIA+ community.[2] This action garnered a negative response from players, especially Russian LGBTQIA+ individuals. Many members of the community voiced their support for the pack being released in Russia especially because depictions of LGBTQIA+ relationships in previous packs, such as the reveal trailer of The Sims 4: Cats & Dogs, were released unaltered there. At first, details about the real reason why this decision was made were not explained further.

This caused the hashtag #WeddingsForRussia to trend on social media as it was used by The Sims community to show support for players who have been affected by EA's statement, as well as to petition EA to reverse its decision.

On February 16, 2022, EA released a statement in which they apologized for their initial decision and also announced that the pack would be releasing unaltered and unchanged in Russia. They explained the reasoning behind their initial decision to ban the pack and admitted that the ban was made without additional research or consultation as "[they] believed that [their] team could not freely share the storytelling of same-sex couple Cam and Dom in Russia and decided the best way to uphold [EA's] commitment to sharing their story was to not release this pack [in Russia]." However, "since then [they] have been listening to the outpouring of feelings from [the] community including both support for [EA's] decision and concern for their fellow community members. [They] acknowledge how important it is for [them] to take a stand against homophobia and share stories like this with those who want and need it most." EA has since "reassessed their options and are now actively working to release the [...] pack in Russia". This resulted in the pack being delayed until February 23, 2022.[1]

A week later, on March 4, 2022, EA stopped selling the entirety of The Sims and other EA titles in Russia due to Russia's invasion of Ukraine.[3]

Upon its delayed release, the pack displayed several bugs and was essentially not functional and required several updates in order to function properly.

The Sims 4 My Wedding Stories Livestream