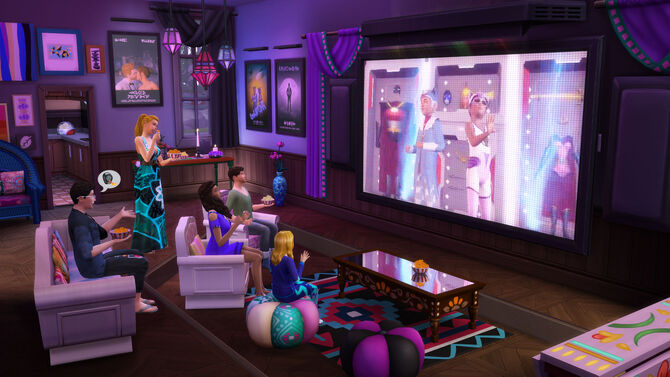 The Sims 4: Movie Hangout Stuff is the fifth stuff pack for The Sims 4. Its development was confirmed on the The Sims official website on January 6, 2016.[1] It was released on January 12, 2016 for PC and Mac, and on February 19, 2019 for the console versions. This pack features a bundle of Bohemian styled objects, two new big-screen TVs in which include 10 unique in-game movies Sims can watch, and the re-introduction of the popcorn machine, previously found in The Sims: Makin' Magic and in The Sims 3 as a Store item.

Why go out when you can stay in, relax, and watch movies? Invite some friends over, hang out, and have a movie marathon with The Sims™ 4 Movie Hangout Stuff. Pop a bowl of popcorn and entertain your Sims with a flick on the all-new projector screen. Chill out and relax with boho-chic outfits and effortless hairstyles.

Behold! The projector screen. Give your home the feel of a movie theater with the all-new projector screen. Watch ten different films while relaxing on the couch or venture outside and watch a movie in the fresh air.

Fire up the popcorn popper. What's a movie without popcorn? Give your Sims the classic cinematic snack, topped with butter, cheddar, or sugary toppings.

Chill out in boho-chic outfits. Just because your Sims are staying in doesn't mean they can't look great. Dress them in outfits that are perfect for enjoying a relaxing day or lounging around at night.

Set the mood. Liven up your Sim’s home with some colorful décor and decorative lighting.