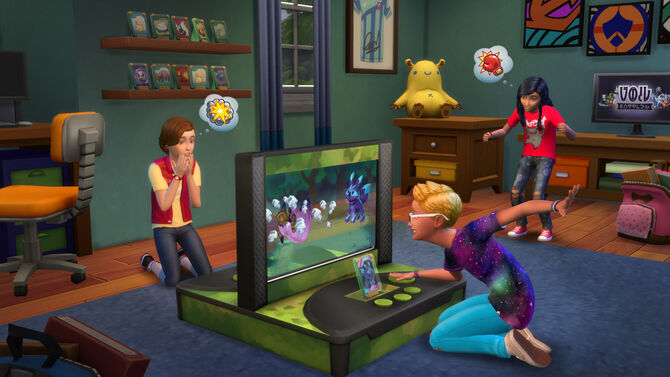 The pack centers around the child life stage and the activities children can do and clothes they can wear. The two new gameplay features are a Voidcritter Battle Station, which will have collectable Voidcritters to go with it, and a Puppet Theater.

Spark the imagination of Sims with new items to personalize kids’ bedrooms in The Sims™ 4 Kids Room Stuff. Collect and trade monster cards, then bring them to life in the electronic battle station. Put on a puppet show to tell stories and entertain family and friends. Show off your kid Sims with new clothing items and hairstyles that express their style.

Battle with monsters. Collect and trade monster cards featuring your Sim’s favorite magical creatures. Use cards in the electronic battle station to bring them to life and challenge friends to a monster duel that’s sure to excite.

Put on a show. With the all-new puppet theater and a bit of imagination, Sims can tell whimsical stories to entertain an audience of family and friends.

Lots of style. Get trendy, playful clothing and hairstyles to showcase their individual style or highlight their obsession with the latest tween heartthrob! So dreamy!

Retrieved from "https://sims.fandom.com/wiki/The_Sims_4:_Kids_Room_Stuff?oldid=889949"
Community content is available under CC-BY-SA unless otherwise noted.