The Sims 4: Get Together 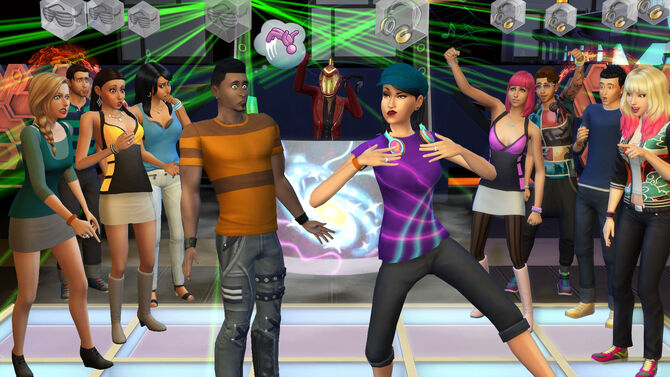 The Sims 4: Get Together
Expansion pack for

The Sims 4: Get Together is the second expansion pack for The Sims 4. It was released in North America on December 8, 2015 and it was released in Europe on December 10, 2015.[1] The console version was released on September 11, 2018. It includes a whole new world where Sims can hang out and get together, as well as many new features, such as social clubs, DJ booths, coffee shops, dressing up, and more. It is the spiritual successor of The Sims 2: Nightlife, with some aspects of The Sims: House Party, The Sims: Hot Date, The Sims 2: FreeTime, The Sims 3: Late Night, The Sims 3: Showtime and The Sims 3: University Life.

Get Together with Clubs!

Create Clubs for your Sims where you set the rules, define their looks, and customize their hangouts in The Sims™ 4 Get Together. Sims in a Club follow your rules when they’re together, regardless of how they usually behave, giving you new ways to play with your Sims! You can also meet new Sims by joining various Clubs with distinct interests, identities, and styles. Get together with other Sims for exciting group activities like super-secret dance parties, midnight bonfires, and more. Explore the beautiful new world of Windenburg, with its scenic neighborhoods and lively hotspots!

Create unique Clubs. You set the rules, select the members, and customize the exclusive hangouts in The Sims™ 4 Get Together. Sims in a Club will follow your rules when they’re together, giving you new ways to play with your Sims.

Join Clubs & meet new Sims. Whether you’re getting stylish with the Paragons or enjoying a delicious meal with the Upper Crusts, there are a variety of interesting Clubs to explore. As you play with Clubs, you’ll unlock perks including secret handshakes, social boosts and more! These will help influence your club and make your club more powerful!

Get together & live it up. Let the games begin! Take on other Sims in foosball, darts, and Don't Wake The Llama. Get cozy with your crush or do a special fire dance around the bonfire. Plus show off your best cannonballs and make a splash with the new jumping platform.

Rule the dance floor. Take the party to the next level with new DJ & Dancing skills. Pump up the crowd with the perfect mix in the DJ Booth. Then jump onto the dance floor and challenge other Sims to an epic dance battle!

Explore a new world. Discover the beautiful new world of Windenburg, with its scenic neighborhoods and picturesque landmarks, including the sprawling hedge maze at the Von Haunt Estate, the alluring pools along the bluffs, and the mysterious ancient ruins.

The Sims 4: Get Together includes Windenburg, a brand new world that is based on a Northern European style village. It contains several social clubs and hotspots that offer several fun activities for Sims to do. Windenburg includes four neighborhoods; The Crumbling Isle, Windslar, Lykke Centre, and Olde Platz. It has a total of 27 lots.

Main article: Club (The Sims 4: Get Together)

Get Together introduces a new feature called clubs, which work similarly to outings in The Sims 2: Nightlife and The Sims 3: Late Night, and social groups in The Sims 3: University Life. There are various pre-made clubs to choose from and Sims can create their own club in which up to 8 Sims can join, and manage them with complete freedom.

Players can create a club in which the selected Sim will become the leader. The player can choose the club's name, club symbol, description and requirements for Sims who join the club. After this, the player can select what activities club members can do, a preferred club activity and an activity which club members are not supposed to do. This can all be customized from a menu that pops up when creating a club.

These Sims can't wait to get down, boogie, and party all night! When at venues like Bars, Nightclubs, and Lounges, these Sims can get a burst of energy with the Party Time interaction. They gain happiness of entering a club and grow Bored when they haven't danced for a long time.

These Sims love being in Clubs, and tend to be happiest when surrounded by their friends.They can Share Insider Story, and may become sad if they don't interact with friends for a period of time. 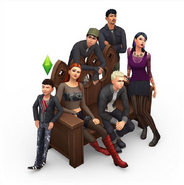 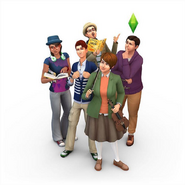 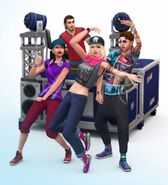 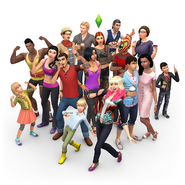 The Sims 4 Get Together Official Announce Trailer

The Sims 4 Get Together Official Clubs Gameplay Trailer

The Sims 4 Get Together Rule The Dance Floor Official Trailer

The Sims 4 Get Together Explore A New World Official Trailer

The Sims 4 Get Together Come to Windenburg!