The Sims 4: Get Famous

Edit
watch 00:56
'The Sims 4: Get Famous' Official Trailer
Do you like this video?
Play Sound

Please do not use the above video for in-game information!
The above video was added by FANDOM as part of their Featured Video program without input from The Sims Wiki community. As such, its content may not accurately represent the subject of the article below. Although the video may not appear for registered users, the video is still visible for users that are not logged in. 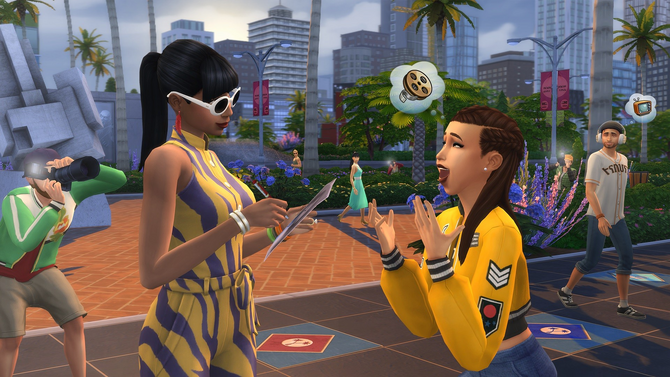 The Sims 4: Get Famous
Expansion Pack for

The Sims 4: Get Famous is the sixth expansion pack for The Sims 4. It was first teased on October 8, 2018 by The Sims account on Twitter[2] and officially announced on October 9, 2018.[3] It was released on November 16, 2018 for PC and Mac,[1] and on February 12, 2019 for the console versions. It is the spiritual successor to The Sims: Superstar and The Sims 3: Late Night, with minor elements from The Sims 3: Showtime.

The main theme of the expansion pack is fame and being a celebrity, while gaining reputation from doing so. Sims can explore the brand new world of Del Sol Valley, meet up with the famous locals, and join the acting career to become rich and famous. Sims can also become famous from various other things, such as singing, writing, painting or cooking.

Experience the celebrity lifestyle with your Sims!

Reach for the stars and rise to celebrity status with The Sims™ 4 Get Famous. Build your stardom as you pursue an acting career, become an A-lister, and guide your Sims down the unpredictable path to fame. From the studio lot to VIP parties, you choose how your Sims can gain worldwide acclaim. Customize and show off your celebrity style, and decorate your Sims’ luxury house on the hills with over-the-top accessories like a solid-gold toilet. Get ready to shine bright in the spotlight and live your best celebrity life.

Claim Your Fame. Now your Sims can live out their wildest dreams of fame and fortune! Rise to stardom in your current career, or catapult to fame with a new pursuit. Bask in the limelight as an aspiring actor or livestream your every moment as an influencer. But remember, the more famous your Sims become, the more attention, perks, and starstruck fans they will attract. Becoming rich and famous can be unpredictable, but whether you make it rain or burn through your Simoleons, you’ll never look back once you’re living that VIP lifestyle.

Act the Part. Be your own muse and direct your Sim toward a brilliant acting career. Get your big break with commercial gigs or land a part in a television series. When your Sims go the extra mile studying lines and wearing unique costumes, all that hard work might lead to a starring role in the next big blockbuster.

Run This Town. Join the glitz and glamour of Del Sol Valley, a new world where your Sims discover fame. Get a starter home in Mirage Park or work your way up to a house in the hills in The Pinnacles. Score a legendary diamond on Starlight Boulevard with your Sim’s name on it, and you’ll be the talk of the town in no time.

Live a Lavish Lifestyle. Get noticed around town in chic streetwear or dress the part with glamorous outfits on set. As your Sim’s status skyrockets, you gain celebrity perks. Decorate a gorgeous mansion with gold-plated furniture and take home a unique set piece to put on display as a tribute to the golden age of you.

The Sims 4: Get Famous includes Del Sol Valley, a brand new world that is based on Los Angeles, especially Hollywood and Hollywood Hills. It is a big suburban area of a city, located near an ocean, and is focused on various celebrity Sims, both new and old. Del Sol Valley includes three neighborhoods—Mirage Park, The Pinnacles and Starlight Boulevard, along with the hidden Plumbob Pictures movie studio related to the Acting career. It has a total of 11 lots.

Main articles: Fame (The Sims 4: Get Famous) and Reputation

Fame is one of the main features of Get Famous and it determines how popular Sims are in their careers. Fame is obtained through certain interactions that gain popularity from certain skills. Sims can also gain fame from working in their jobs, specifically Actors. Celebrities can also earn and manage fame perks in order to gain advantages with more fame and reputation as well as certain boosts to careers, friends, and media production.

Reputation is another feature that plays a part in the public image of a Sim. Every Sim has a reputation, both good and bad, but if it stays neutral it won't have any bearing on gameplay. A celebrity's reputation garners a reaction from nearby Sims. If a celebrity has either a neutral, good, great or pristine reputation, they will get cheers and happy reactions from other Sims. If they have a bad, awful or an atrocious reputation, celebrities will receive boo's and other negative attention from nearby Sims.

The actor is an active career and the main way of gaining fame in Get Famous. Actors must join one of two agencies to start getting auditions. A.I. Staffing Agency or Everyday Extras Talent Agency. Either agency will send notifications reminding their actors to find auditions and getting gigs to start getting an income. Actors can succeed or fail in the audition. Auditions may be bypassed once the Sim reaches Level 3 in fame by obtaining the "Established Name" perk.

When actors have an acting gig, they must attend to the studio lot and perform their daily tasks, consisting of getting their costume fitted, hair styled, practicing lines, talking with the director, etc. When the actor is ready, they can speak to the director and be directed to the main stage. In the main stage, the actor must carry out an array of actions, depending on their acting skill.

These Sims are all about themselves! They can Fish for Compliments, are more excited when receiving a present, and may become tense when they haven’t gotten enough attention. The celebrity spotlight is something they generally relish. After all, everyone else should love them as much as they do themselves, right?

The expansion's official title and a render were released early on TheSims.com. 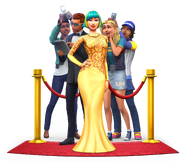 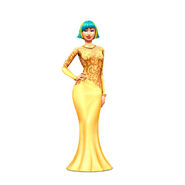 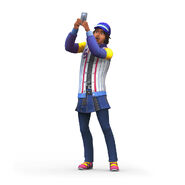