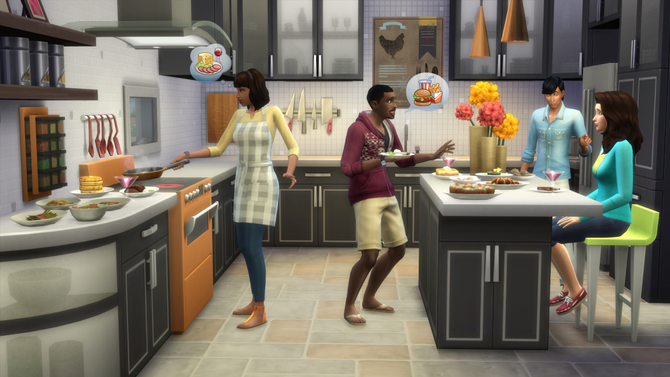 The Sims 4: Cool Kitchen Stuff is the third stuff pack for The Sims 4. Cool Kitchen Stuff adds new appliances, cabinets and furnishings, new hairstyles and apparel, new meals for Sims to prepare, and the re-introduction of the ice cream maker, previously featured in The Sims 3 as a Store item.

Create the coolest kitchens with sleek new furnishings and whip up some fun with the new ice cream maker!

Serve Up Some Fun!

Transform your Sim's kitchens and add some modern flair with sleek, stainless steel appliances and new gourmet furnishings. Discover what surprising new flavors your Sims will create with the new ice cream maker! Plus, your Sims will look good enough to eat with new fashions and hairstyles.

Whip up some fun with the all-new ice cream maker. I scream, you scream, Sims love ice cream and this ice cream maker does it all! Grab a cone and serve up gelato, ice cream, and soft serve. Then add banana slices, whipped cream, sprinkles, and chocolate sauce – yum!

Give your kitchen a fresh new look. Create a gourmet kitchen with stainless steel appliances, frosted glass cabinet doors, and more. This kitchen is worthy of any master chef, even if your Sims prefer to use the microwave to make their meals.

Good-enough-to-eat style. Your Sims are ready to serve up some fashion! Update your Sim’s look with a variety of new hairstyles and trendy, casual apparel.

The ice cream maker produces a variety of ice creams that Sims can also add toppings to. Some ice creams have certain effects like temporarly becoming a PlantSim or instantly becoming fat.

This pack comes with a selection of new modern furniture mainly for the kitchen.

Sims of both genders receive a range of new clothing along with new hairstyles, outfits and other accessories: 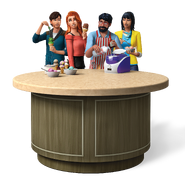