The Sims Wiki
Register
Don't have an account?
Sign In
Advertisement
in: Featured Articles, Into the Future, Expansion packs,
and 2 more
English

The Sims 3: Into the Future

The Sims 3: Into the Future
Expansion pack for

The Sims 3: Into the Future is the eleventh and final expansion pack for The Sims 3.[3][4][5] Into the Future was initially announced on January 8, 2013 during an EA live broadcast, though at the time the game was only in early development, and did not have an official name. The concept of the pack was refined over the year, and was finally released on October 22, 2013.

Fire up the Time Portal and send your Sims to their most exciting destination yet: a whole new world that exists hundreds of years in the future! While they are there, your Sims can build their Advanced Technology Skill in order to get the most out of future technology. Whether your Sims are cruising around on their hoverboard or jetpack, traveling via monorail or tube elevator, or trying out attractive futuristic hairstyles and clothing, there's a whole new world to experiment with and explore. Create and customize Plumbots with Create A Bot, add them to the household, and program them with a wide variety of trait chips that will alter their behaviors! Jump between present and future worlds at will, and experiment with how your Sims' actions in the present can have surprising effects on their own legacy, their descendants, and even the way of life for future Sims!

Almanac of Time
The almanac of time can be viewed to keep tabs of the future progress. The almanac appears in Sim's inventory. There are 3 tabs in the almanac.

The boom in Bot technology has left many Sims fascinated and intrigued by these complex machines. While many Sims are at home with their organic bodies, some would prefer to be a Bot instead.

When a pile of disjointed components rattle around a Sim's head, they tend to be called "Unstable." Their traits are in a constant unpredictable flux and delusional episodes are just around the corner.

Two Sims flying with a Jet Pack. Oasis Landing is seen in the background 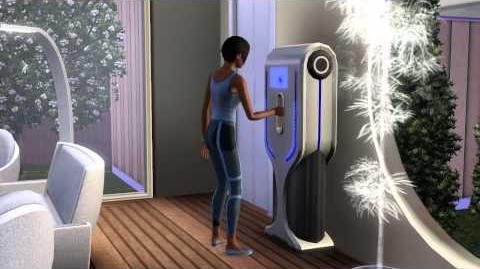 The Sims 3 Into The Future trailer (English) HQ
Announce Trailer 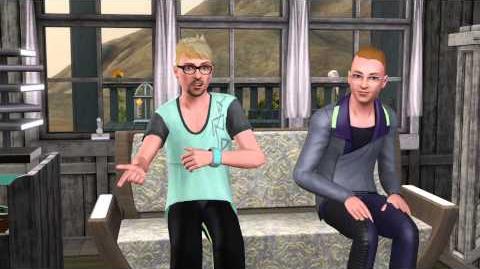 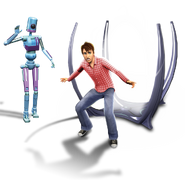