The Sims Wiki
Register
Don't have an account?
Sign In
Advertisement
in: Games, Console games in The Sims series, The Sims 2 (console)
English

In this game the player's Sim is a vet who can have either a dog or a cat. The Sim looks after pet patients. When that pet is better the owner will collect them, and if the vet does a good job they get money and increased reputation. The Sim can also take their own pet to the park and interact with other Sims. Unlike The Sims 2, the control pad cannot be used to move a Sim, this has been retained in Castaway and Apartment Pets.

Like the GBA and PSP versions, the game received negative reviews, getting a score of 49 on Metacritic. 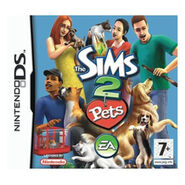 This article relating to console, handheld and mobile games is a stub. You can help The Sims Wiki by expanding it.