The Sims Wiki
Register
Don't have an account?
Sign In
Advertisement
in: Featured Articles, Nightlife, Games,
and 2 more
English 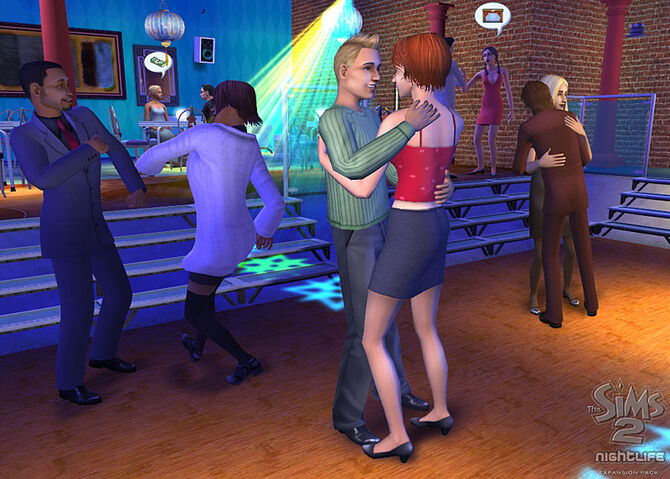 The Sims 2: Nightlife
Expansion pack for

Nightlife centers on the new Downtown area, which has various activities, such as bowling, karaoke, dining and dancing, as well as a photo booth, and includes a dating mini-game which allows the player to engage in their Sim's relationships in greater depth.

Your Sims are on the town hitting all the swanky hot spots. Whether they're dancing until dawn, romancing that special someone, or striking out at the bowling alley, it'll be an unforgettable night! Let your Sims loose to enjoy their favorite after-dark activities as they pursue a life of pleasure. Determine their love lives as you discover the chemistry between Sims. Will their life aspirations and personalities click or clash? It could be the beginning of a stormy affair or a dating disaster. Ready for fun and romance? Bring on the night!

The game is reminiscent of The Sims: Hot Date and The Sims: House Party, which were expansion packs for the original The Sims game, and which focused on new social interactions and locations for Sims to visit, such as a romantic restaurant and Night Club. Nightlife follows in a similar theme.

New additions include inventories, new interactions, and over 125 new objects. NPCs that a player's Sim dates can now leave gifts or hate letters at the Sim's home, depending on the success of particular dates. Some of the new NPCs include party DJs, a Gypsy Matchmaker, Mrs. Crumplebottom, and Grand Vampires.

Nightlife also adds a new aspiration. The Pleasure seeking aspiration is assigned in exactly the same way as any of the other 5 aspirations. Sims with the Pleasure Seeking aspiration crave enjoyment in many different ways, whilst they fear embarrassment. Pleasure Sims may receive wants such as "juggle" and "jump on lounge." Nightlife has also introduced a new reward object titled the ReNuYu-Senso-Orb which will enable any Sim to have their aspiration changed at any time. However, this object can fail, like all other aspiration reward objects. If that happens, the Sim using it at the time will then have the Grilled Cheese aspiration, and normal wants will be superseded with the urge to eat grilled cheese sandwiches.

In Nightlife, Sims can own their own cars instead of relying on the carpool. There are several models and colors available. In addition, driveways (mandatory for any residential lot to accommodate a car) and garages can be built into the Sim's lot.

It is now possible to design new, more customized swimming pools. Included is a new diagonal shaped swimming pool tool, which can be used to create extensive shapes not previously possible. However, the pool ladder and diving board may only be attached to pool tiles square on to the lot.

The lot mode has been expanded in Nightlife, so that it is possible to view the neighborhood from a lot. Players may leave one lot to play another without having to go back to the neighborhood mode. It is still impossible, however, for a Sim to invite themselves to another lot.

It also allows the user to adjust roof angles through the game's console.

As with previous expansion packs, not only does The Sims 2: Nightlife come packed with more content, but also adds something to the overall gameplay of the original game. New aspects of gameplay that are added to Nightlife are:

Sims can now ask someone that they are interested in on a date and if the person accepts then a meter will appear and the player needs to build it up unless you want a bad date (which can be done by getting caught cheating or by cheating using boolprop testingcheatsenabled true — shift-click on a Sim and click on set score).

The date can have a score from Dream Date to Horrible. This works off of each Sims wants so fulfilling wants of both daters causes the meter to climb higher. The more fears fulfilled the lower the meter. At the end, depending on how high the date meter is, the player's Sim may get a gift the next day of a bouquet of flowers or a note. If the date went horribly then they'll get a stinky letter or a flaming bag of poo, but then there's that small possibility where you don't get anything at all.

The Sims 2: Nightlife introduces the concept of fury. Of limited duration, this generally affects which social interactions are accepted. It is most likely to occur when a spouse is caught cheating with another Sim, though it can also occur in numerous other situations, such as when a Sim is stood up, has a drink thrown in their face, or gets into a fight. When one Sim becomes furious at another Sim, the target of their fury will be subjected to vandalism, such as having their newspaper stolen, or their trash can kicked over. Also, a furious Sim will be more likely to autonomously do irritate and fight social interactions. Fury can be resolved by waiting out the furious timer (which varies depending on the damage) or buying the Sim off. The Seasons expansion pack also introduces a third way to eliminate fury: by drinking strawberry juice.

Contacts are friends-of-friends that can call the player's Sim up wishing to establish contact. These contacts come predefined with both friendship and lifetime relationship points, making it easier to build a friendship with them. These predefined points are only available for a limited time, however.

Each teen, adult and elder Sim has two turn-ons and one turn-off. Turn-ons and turn-offs are designed to make relationships easier (or harder) to achieve. Sims with compatible chemistry will have lightning bolts in their relationship panels. Sims can use the action "Scope Room" to find those special Sims.

The Smoogo Minima, one of the 5 cars added.

The Landwhale, one of the cars featured in Nightlife.

The Yomoshoto Evasion, a car in Nightlife.

The Hunka 711, the most expensive car added. 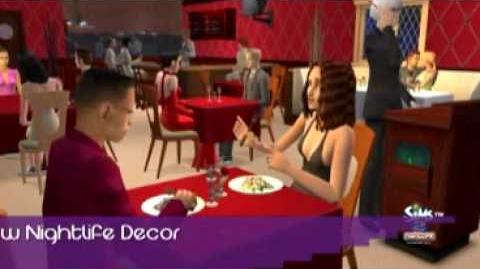 French box art with an unused translation of the pack's name – the actual name used for the French translation is Les Sims 2: Nuits de Folie.