The Sims 2: Castaway is a life simulation video game released for Java ME mobile phones in 2007.

Lose yourself on a remote island with The Sims 2: Castaway! Create, customize and guide your Sim to explore, survive and thrive on an uncharted tropical paradise in this great Sims game! Lagoons, jungles, beaches and hidden pirate treasures await you. Provide for your Sim with food, make clothing and build shelter. Avoid isolation and keep your Sim happy by communicating with other inhabitants. Use easy, one-button controls to move your Sim and interact with others. Investigate rich worlds new to the Sims mobile universe!

The player traverses the game world by using the D-pad or 2, 4, 6, and 8 to walk (in the Nokia version) or using those buttons and 1, 3, 7, and 9 to move an onscreen cursor around and pressing the button in the middle of the D-pad or 5 to travel to a point on the map (in the Sony Ericsson version). Missions are often assigned by non-player characters (NPCs), such as exploring more parts of the island, surfing, or winning back items from Higgins the Orangutan. The player can chat with other characters to boost their friendship with them. Furniture for the player character's camp can be bought from Higgins, clothing can be crafted by Leila, and food can be cooked by Sandi. The number of days spent on the island can be checked on a rock in the jungle. There are dangerous areas and items that can hurt or even kill the player's Sim, including poison berries, honeycombs, lava, and quicksand. The needs of the Sim, such as hunger, comfort, and energy, must also be paid attention to. Information on the player's tools and other characters can be found in the info screen, from which the Sim's needs can be checked and food can be consumed. It is possible to quickly travel from one part of the island to another using the map if the player has already traveled to their destination normally before. 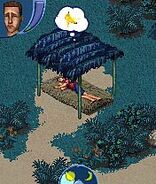 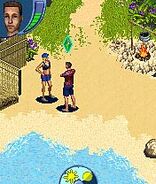 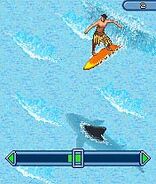 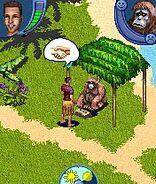 Retrieved from "https://sims.fandom.com/wiki/The_Sims_2:_Castaway_(mobile)?oldid=937731"
Community content is available under CC-BY-SA unless otherwise noted.