The Sims Wiki
Register
Don't have an account?
Sign In
Advertisement
in: The Sims (console), Games, The Sims, Console games in The Sims series
English 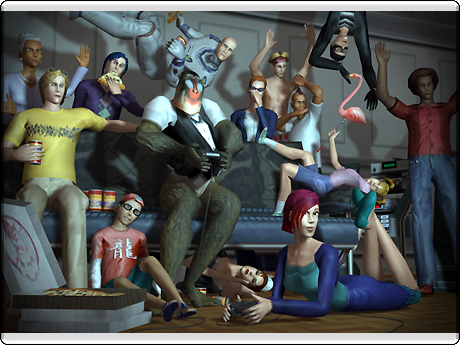 The Sims
First console title in The Sims series

The Sims for consoles is the first Console Sims game, and was the first game in the series to introduce a fully three-dimensional camera and environment. The game was released on PlayStation 2, Xbox, and GameCube in 2003. The game is primarily missions-based and has two available play modes:

An object limiter is installed in this game, which limits the number of objects allowed in a single household. This is due to the limited available memory in the consoles.

"Get a Life" Mode requires the player's character to complete different objectives as they progress through life. They start out unemployed and living in Mom's house, and end with enough money to buy a yacht.

It's generally easier to sell a useless item in the house, such as a grandfather clock or any other decoration worth 1,000 - 2,000. You can also use a very easy and simple in-game cheat to get the families and your sim rich without corrupting the game.

Each level occurs in one house/lot, and the Sim must complete several goals to unlock new items in Buy mode as well as the levels for the 2-player game mode.

This is technically free play for the console. There are 5 pre-made families, 3 of which are moved in, 2 that are in the family bin.

Those who are moved in:

Those who aren't moved in:

Control of the Sims is up to the player, there are no set goals, and no requirements (except for certain objects needing to be unlocked).

There are several mini games in the 2 player game mode which consist of:

Differences between The Sims and The Sims (console)[]

This is a brief summary of some of the differences between The Sims and The Sims (console).