The Sims Wiki
Register
Don't have an account?
Sign In
Advertisement
in: Neighborhoods in The Sims 4, Glimmerbrook, Realm of Magic
English 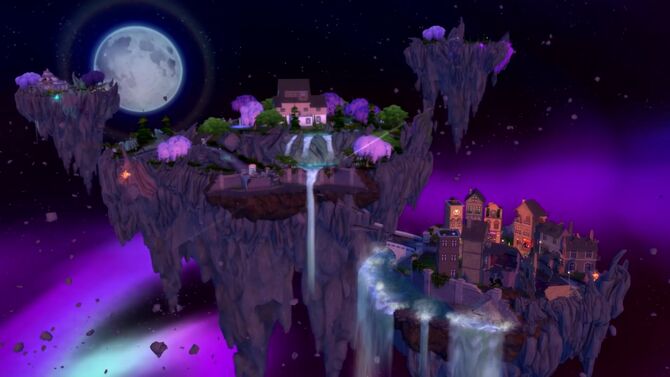 The Magic Realm
Sub-neighborhood · Featured in:

The Magic Realm is a hidden neighborhood featured in The Sims 4: Realm of Magic. It is accessed by travelling through a portal in Glimmerbrook or by using a Glimmerstone, which can only be used by spellcasters. The neighborhood consists of a small, partially-destroyed town built atop floating rocks in a dark void, with a unique day and night cycle. If Seasons is installed, the weather is always partly cloudy, referred to as "Mystical Clouds".

When visiting the neighborhood, Sims are taken to the "Magic HQ"[1], where the three spellcaster sages reside. Other spellcasters will visit this building as well.

The "Magic HQ" consists of three above-ground floors (though only two are accessible) and two basement floors. The first floor foyer has doors to other areas in the building and stairs leading down to a small dueling area. Other rooms on the first floor include a kitchen, a bathroom, a study and a library. The second floor has three rooms with cauldrons, presumably one for each of the sages, as well as a meeting area. The basement includes another library, another bathroom, and a bar.

One of the floating islands in The Magic Realm is home to a marketplace for spellcasters, known as Casters Alley. There are three vendor stalls to purchase from: one for wands, spell tomes and familiars, one for magic brooms and crystals, and one for alchemy ingredients. Each stall is staffed by an "Astral Projection Vendor", who have the appearance of ghosts but are not actually ghosts. Casters Alley may be a spoof of Diagon Alley from Harry Potter.

The dueling grounds can be found on another floating island. Spellcasters can specifically challenge each other to a magic duel at the dueling grounds, rather than just at a nearby clearing.

The third floating island is home to gardens and a destroyed greenhouse. Sims cannot enter the greenhouse, but the outside has plenty of plants and resources to harvest for potion brewing. Mandrake and Valerian plants naturally occur here.

The Magic Realm, as seen in the reveal trailer.