The Sims Wiki
Register
Don't have an account?
Sign In
Advertisement
in: EA Games, Patches and updates, Websites, Downloads
English 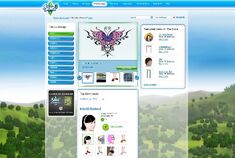 The Exchange is the official place where creators can share their custom content for The Sims 3. It is a community feature made available by Electronic Arts. It is free to up- and download from The Exchange once the player registers as a user. There is not a single Exchange for the entire series. The Sims and The Sims 2 each had its own site, with its own Exchange, which operated in its own way, according to its own rules.

The Exchange for The Sims had sections for families, as well as for lots for the various community areas. In general, downloads from this Exchange did not include any custom content used on the lots or any custom skins worn by the Sims in a family.

Downloading from this Exchange did not work with browsers other than Internet Explorer, though users of other browsers could view family albums. Much data on this Exchange was lost in a major crash in early 2008, and was never restored. After that, downloading became erratic, and uploading effectively became unavailable.

The exchange for The Sims 2 (along with the entire website) went down sometime in the Spring of 2011. After complaints, however, the site returned, with the content from the exchange slowly being added back. On January 14, 2013, The Sims 2 Exchange was removed by EA, along with the rest of TheSims2.com. When it was still active, players could share stories, lots and sims on it.

There was a known 'Error code 5' bug with The Sims 2 Exchange. A patch to fix the issue could be downloaded here: http://thesims2.ea.com/community/Sims2SSLPatcher.exe (dead link).

While playing The Sims 3, players can directly upload houses, and other objects straight to the exchange through the Launcher.

Some creators do not appreciate their work being uploaded to The Exchange. They'd rather upload their work to communities such as ModTheSims. Pay sites in particular are imploring people not to redistribute their content on The Exchange as it is free to use, though there are no legal ramifications to doing so. Most creators on ModTheSims have a policy list on their profile, nearly all of them have a "Do not upload my creations to The Exchange." policy.