The Sims Wiki
Register
Don't have an account?
Sign In
Advertisement
in: Sims, Female Sims, Young adults,
and 22 more

Temperance is a ghost NPC introduced in The Sims 4: Paranormal Stuff as its main antagonist. Temperance is a mean ghost that will randomly appear in haunted house with purpose to make it more difficult to raise spiritual volatility and make life of sims living in the house more difficult.

She'll appear for the first time on the 5th night, and once she appears, Temperance will begin creating more cursed objects, interrupting interactions with specters and extinguishing ghastly candles, alongside doing typical angry ghost interactions, such as scaring sims and destroying objects. Sims that are in the same room as Temperance will receive a scared moodlet. 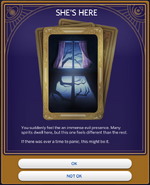 Players recieve this warning about Temperance on the fifth night of living in a Haunted House.