The Sims Wiki
Register
Don't have an account?
Sign In
Advertisement
in: Objects, Objects in Livin' Large, Skill objects,
and 8 more
English 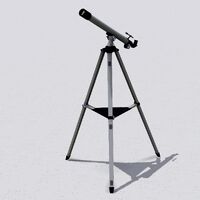 A telescope in The Sims 3

Telescopes exist in The Sims: Livin' Large, The Sims 2, and The Sims 3. They can be bought in buy mode. Using the telescope increases a Sim's fun motive and builds the logic skill. In The Sims 4, the telescope is replaced by a backyard observatory.

The Horrorwitz "Star-Track" Backyard Telescope was introduced in The Sims: Livin' Large and provided a good way to increase a Sim's Logic skill. However, a Sim who spends a long time looking through it (two or three points without taking a break), may be abducted by aliens. A blue sphere will appear, and the Sim will vanish for a few hours. When the Sim returns, their personality will have been reversed, and they will think about aliens for quite a while afterward.

The telescope has a fun rating of 4.

In The Sims 2, there are two telescopes, the Astrowonder (§550) and the Farstar e3 (§2100). The price isn't the biggest difference - Sims using the Astrowonder won't ever be abducted (unless cheats or hacks are used to force an abduction), but with the Farstar it's possible. If an adult male Sim who is more than 5 days away from becoming an elder gets abducted, he will come back pregnant.

Children can use the telescopes, but will appear to levitate while doing so, as the booster stool they normally use will not appear. This was fixed in the Apartment Life patch.

In The Sims 2, a telescope can be used indoors, so long as it is pointed out a window. The window can be single-tile or multi-tile, but the left side of the telescope has to be facing a window for it to be usable. This can be seen in the Tinker family's house in Bluewater Village, which has a Farstar e3 pointed out a second-floor window.

If boolprop testingcheatsenabled is enabled, players can trigger an abduction by Shift-clicking on the telescope and selecting "Get Abducted". However, this method isn't perfect as nearby Sims will not get the memory of the abduction without mods. This method does not work after FreeTime is installed.[clarification needed]

Using a telescope during the day allows the user to "spy" on their neighbors. If they are caught, however, the angered neighbor will rush onto the lot, head straight for the spy, and shove them, causing a decrease in relationship. The first Sim instance in the neighborhood data, as seen in SimPE (not necessarily the first Sim created), will always be selected for the angry neighbor. If the player is playing with the family/household of said Sim, the first of the secondary family will be the angry neighbor instead. The following table lists all the default angry neighbors in the pre-made neighborhoods:

Explore distant worlds, study the cosmos, or search for shooting stars: with an Astrowonder Telescope the rest of the universe is as close as the windows across the street. With solid construction and a 700mm lens, the Astrowonder Telescope is the logical choice for the amateur astronomer.

See the universe with the Farstar e3. Its 11-inch aperture opens new vistas on darkened spaces and on the whole galaxy if you remove the lens cap. A precise DC motor drives X and Y pivoting and is bound to irritate any passing aliens, but the Farstar e3 looks great on your deck.

The Sims 3 base game returns to having a single type of telescope, found under the Study->Hobbies section. The Outdoor Living stuff pack adds another type.

In addition to increasing fun and logic, a telescope also allows a Sim to "Search The Galaxy", in which case they may find and name a new celestial body, such as Stars, Moons, Planets, Comets, and Satellites.

The Sim may also see a meteorite fall to the ground. This will place a map marker where the Sim can go to retrieve it. This map marker eventually disappears, so the player will have to be quick.

Sims can get abducted when they search the galaxy at night.[TS3:S]

Sims do not seem to use telescopes to spy on their neighbors, even when used during the day.

Travel to outer space without ever leaving the ground! See as far as the Emong Nebula, or perhaps even the 3C-273 quasar. With an entire galaxy full of sights, sounds and smells, how could you resist! Disclaimer: Astral Playground cannot render smells or sounds. Unless your eyeballs can smell.

At the turn of the first millennium, Morrigan Hemlock fought for the inclusion of astrology into the scientific realm, but could never convince the authorities of its scientific legitimacy. After nearly a 45 year battle, Morrigan turned to astronomy as a scientific endeavor. This telescope, first coined as a "star gazer" is what Morrigan used to wow the crowd of scientific experts, and thus forever lost her love of astrology.

A wide, sturdy base stabilizes the stars while you peer through this fine telescope. Equipped with a precision tuning handle, Perseus picks out the tiniest specks from the firmament.

This powerful telescope lets you get up close and personal with the infamous North Star so you can see for yourself just how shiny, bright, and unmoving it really is.

With the Safari Living Home Decor Collection, your "totally true" tales of action, peril and safari adventure become at least 43% more believable when recited in close proximity to any one of our unique safari furniture and/or decor items! Take it from us; for unquestionable adventure authentication, the Safari Living Collection is all the proof you'll need.