Various teddy bears in The Sims 3.

A teddy bear is a plush toy that toddlers and children can play with.

The Durably Plush Teddy Bear is a toy in The Sims 2. It is available in the Misc. > Children section of buy mode for §49. The Sims 2: FreeTime adds two versions of the Paw-crafted Teddy Bear. All three bears are identical except for color, but they are treated as three separate objects. FreeTime also allows Sims with at least a Bronze talent badge in Sewing to sew Little Bear Boo for §56. Sewing a teddy bear allows the player to choose patterns that are not available in buy mode, but sewn bears are otherwise identical to those bought in buy mode.

Teddy bears are always depicted standing in the buy mode catalog, even though they are in a sitting position when placed.

The Supernatural teddy bears represent each life state added to the game up to that pack, including ones not present in Supernatural. They depict a fairy, a werewolf, a vampire, a witch, a SimBot, an imaginary friend, a genie and a mummy (not to be confused with the mummified bear in World Adventures). This also means there are no teddy bears for life states added after Supernatural, such as mermaids, PlantSims or Plumbots.

There is a statue of the Wugglesworth Schnuggles Bear (called Senior Wugglesworth) in The Sims 3: Showtime, but it is purely decorative and cannot be played with.

Teddy bears raise a Sim's fun and social motives. The base game bear has three recolorable channels, and players can give it a name. Adult Sims can "talk through" a teddy bear to younger Sims to entertain them.

If a toddler, child, or older Sim with the childish trait sleeps with a teddy bear in their inventory, they will get the "Cuddle Time" moodlet. With babies and toddlers, it will appear in their crib while they are asleep.

If there are vampire gnomes on a lot, they will randomly transform any present teddy bears into copies of themselves, but they still function as teddy bears.

Teddy bears in The Sims 4 are much larger than in previous games, but they still take up a 1x1 square of space and function mostly the same. The base game includes five bears (one of which is unlockable), with more added in The Sims 4: Spooky Stuff, The Sims 4: Vampires and The Sims 4: Cats & Dogs.

Playing with a teddy bear raises the creativity and social skills for children, and the communication skill for toddlers. 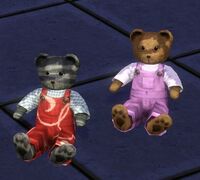 A Mummified Teddy Bear in The Sims 3: World Adventures. 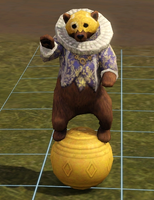 The Senior Wugglesworth statue in The Sims 3: Showtime.

A vampire gnome turning a teddy bear into a gnome in The Sims 3: Supernatural. 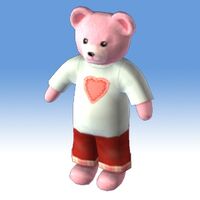 Add an image to this gallery
Retrieved from "https://sims.fandom.com/wiki/Teddy_bear?oldid=894665"
Community content is available under CC-BY-SA unless otherwise noted.