Tate Curley is an elder Sim who lives in Appaloosa Plains with his wife, Esme and their cat, Petunia.

Tate is said to be bitter, and he has rejected every attempt from other townsfolk to buy the terrain where his house is. This caused him to be isolated from the rest of the community, though his wife and her ways to work his heart may be the solution to the problem, as implied by the multiple biographies. He also dislikes children, which maybe the reason why Tate and Esme have no heir apparent to protect their land from any future idealistic businessmen and politicians after they pass away.

He is friends with his cat Petunia, distant friends with the local cat lady Hetty Lionheart, acquainted with Benjamin Schmidt, and enemies with Booker Singleton, whom represents what Tate dislikes about city-slickers. He retired from the Political career track at level five as a City Council Member. Tate has four points in Charisma and five points in Gardening. In his inventory, Tate carries two books.

If the players wish him to complete his lifetime wish, he will have to give up his retirement and rejoin the Political career. 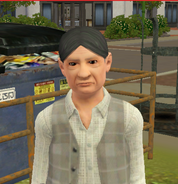 Add an image to this gallery
Retrieved from "https://sims.fandom.com/wiki/Tate_Curley?oldid=886712"
Community content is available under CC-BY-SA unless otherwise noted.