The Tanner family is a premade family who lives in Lucky Palms, a downloadable neighborhood. The family consists of a married couple, Romon and Aya, and their children, Ethan and Yuna. The family is expecting another baby, when Aya gets pregnant shortly at the start of the game. It's implied that Astrid Tanner, a deceased woman who is buried in the Sunwest Graveyard, is Romon's mother (or even grandmother. Remember it's suppose to be four generations, Ethan and Yuna are the fourth generation while Romon is the third.), even though she doesn't appear in the family tree.

According to the family bio, the Tanner family is a long-line family of chef. Romon himself works as a well-known Chef du Cuisine of Desert Diner, a local diner in Lucky Palms. The family seems to be famous for its home grown culinary skills, as opposed to a fancy formal cuisine training. It appears that recently, the family had a rivalry against Lennon Sosa, who is also a chef who works at The Blooming Cactus Bistro, a fancy bistro in the town. Lennon is known to have graduated at a fancy formal cooking school, Formage Grille, which has challenged the Tanners' cooking excellence of home grown culinary. Romon seems to hope Ethan would carry on the family tradition and win against their enemy. Ethan, on the other hand, is good, but implied to develop rebellious personality in his bio.

On the family side, Aya wants to have a big family. She wishes to raise 5 children to teens, which might explain why she will be pregnant at the start of the game. Interestingly, the family appears to pass down the immunity to fire. Both Romon and Yuna have the hidden Immune to Fire trait who, in turn, lacks one trait of their age in general. 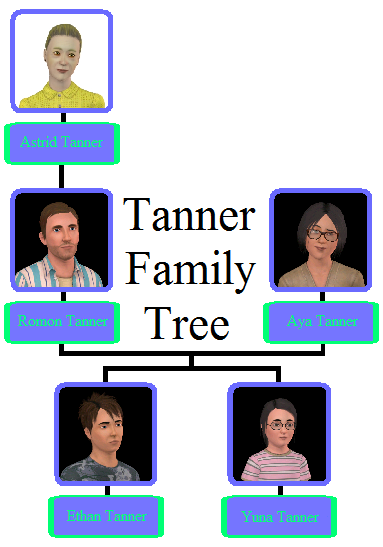 Retrieved from "https://sims.fandom.com/wiki/Tanner_family?oldid=882715"
Community content is available under CC-BY-SA unless otherwise noted.