This penthouse household is the home of Jessica Talon and Rafael Striker, and it's named Talon and Striker household. These two lovers have two very different family backgrounds - Jessica's which could be considered to be part of a family-bloodline that could date back many years, while Rafael is the younger, foreshadowed brother of a 4 star celebrity. Jessica is feared by many new vampires because she is powerful, she is afraid of being caught in a conflict between vampires because she doesn't want her fragile boyfriend to be involved in such monstrous event.

The Talon and Striker homeEdit

"This egyptian Deco building is adjacent to downtown nightlife and boasts some odd shapeed landscaping. Perhaps a Sim who has travelled to Egypt would have the answer?" 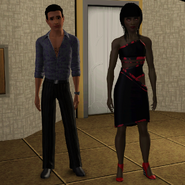 Jessica and Rafael in-game
Add an image to this gallery
Retrieved from "https://sims.fandom.com/wiki/Talon_and_Striker_household?oldid=888383"
Community content is available under CC-BY-SA unless otherwise noted.