This is a page for discussing improvements to Tycho Curious

I don't want another heated edit war (I got into one, and now the other user who was involved absolutely hates my guts), so I decided to make a poll. Hope this helps. --Sparrowsong 16:00, May 5, 2010 (UTC)

I was wondering if there was any evidence to support this statement in the main article: "There is a much higher chance (around 75%) of getting a girl than a boy and unless cheats are used". I've played this family about 5 times and on 4 of those occasions the baby has been a boy. Could it just be that the chances are the usual 50-50 and the seemingly higher occurrences of one gender over the other are coincidental? Beatrice Monty 15:08, May 19, 2010 (UTC)

How come I didn't get a girl? Edit

My Pascal never had a girl, but Vidcund did sometimes.

We seem to be having a problem deciding where this arcticle should be placed. The poll numbers never seem to have a large majority if one at all, so I am proposing we just have good old fasioned debate and just go with the side with the best argument thoughts?

My opinion is the page should be moved back to unborn baby Curious. After playing the game it differs greatly from the implied upcoming events in TS2 and has some differences for example Ophelia Nigmos is Ophelia Specter and Olive is her mother instead of aunt.--Thelamppost 01:25, September 1, 2010 (UTC)

How about having an article for the unborn one in TS2/PC and another article for the named one in TS2/PSP? Many other Sims have two pages since they're not the same, though they may have the same name. Duskey(talk) 13:51, September 1, 2010 (UTC)
I personally think it should remain as Tycho Curious, since that's the most chronologically up-to-date name available for the character, in much the same way that Sims who have married and taken a different surname (or, as in John Burb's case, have dropped a childhood nickname) have the most recent name in the series time-line as their page title. Beatrice Monty 19:44, November 1, 2010 (UTC)

Is is not in the psp verison Edit

After further thought, I think it's a matter of Sim genetics rather than anything pre-coded. The baby's other parent is the NPC Pollination Technician, and the green alien skin tone appears to be dominant, so babies born in-game to abducted male Sims have green skin. I suppose it's possible that the random element involved in determining a baby's genetics could occasionally produce a baby with a normal-Sim skin tone, but it isn't likely. Dharden (talk) 16:38, March 22, 2013 (UTC)

The headshot in the article, whether it should be kept or not, is a fake. The genetics Pollination Technician passes down and those ones alone look different on babies. If that really was Tycho Curious, then it would have inherited some degree of the PT structure that looks different on alien babies. The headshot has a baby with green skin, black eyebrows and black eyes. But other than that, it just looks like a normal baby.

Know what I mean by alien babies (descended from Pollination Technician) having some facial genetics that look different on a baby such as the larger eyes and the extremely short nose? -- C.Syde (talk | contribs) 08:41, January 24, 2014 (UTC)

We know the headshot isn't actually what the unborn baby might look like - it's simply a representation of his possible appearance. If I recall correctly, the image might also be based on his appearance in the PSP version of TS2. Ѧüя◎ґ (talk) 09:32, January 24, 2014 (UTC)

I'd say we should move Unborn Baby Curious to Tycho Curious because as Beatrice Monty said that's the most chronologically up-to-date name available for this character. But I wonder what other people think :| -- C.Syde (talk | contribs) 09:15, June 22, 2014 (UTC)

Well, under voting system, 29 users said it should be Tycho Curious while 42 users said it should be unborn baby Curious. Had it been discussed further, it might have a different result. I'm inclined to rename it to Tycho Curious too, with the same reason above. It's like Claudio Monty, who hasn't been born in Monte Vista, but already was in Veronaville. Even though the unborn baby Monty in Monte Vista could be anyone, people will generally accept that the baby is Claudio. Nikel Talk – Vote! 16:43, July 6, 2014 (UTC)

I support the name change to 'Tycho Curious' in order to keep consistency with our sister wikis. They use a different language variant of Tycho Curious for this article, rather than 'Unborn baby Curious'. Ѧüя◎ґ (talk) 04:54, September 22, 2014 (UTC)

I've just moved the page, due to my reasons stated above. Although the poll stated that more people were in favor of keeping the page under the name Unborn Baby Curious, the poll was created four years ago, and thus many users might have a different opinion than before. I know that it's possible for some users to change their votes, but a lot of them may either have changed computers, or retired from editing here. -- C.Syde (talk | contribs) 06:32, September 22, 2014 (UTC)

Has anyone played the Curious family from the Gallery yet? What was the gender and the appearance of the baby? Any differences between giving birth at home or at the hospital? The family can be downloaded from Maxis: https://www.ea.com/games/the-sims/the-sims-4/pc/gallery/CA2C46C95CB311E98398795DCB646EBF —Gvaudoin 💬 16:50, April 20, 2019 (UTC)

I've tried multiple times now and Pascal always had a girl with human eyes and human skin. When he has the baby at the hospital, she will have Alien ears and an Alien voice and get an alien crib. But if he has the baby at home, she appears completely human. Does anyone have different experiances? —Gvaudoin 💬 21:00, April 23, 2019 (UTC)

I've played the birth of Pascal's baby twice and the baby was female with human skin, alien eyes, and pointed ears both times. When I had the baby at home, the game gave me a normal bassinet, but when I had the baby at the hospital, it gave me the alien bassinet. From my home-birth play through, as a baby and toddler: 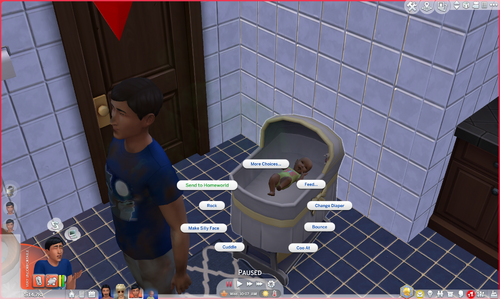 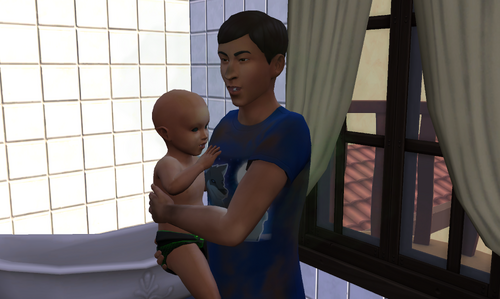 From my hospital-birth play through, as a baby and toddler again: 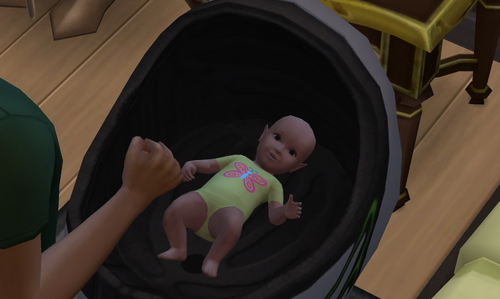 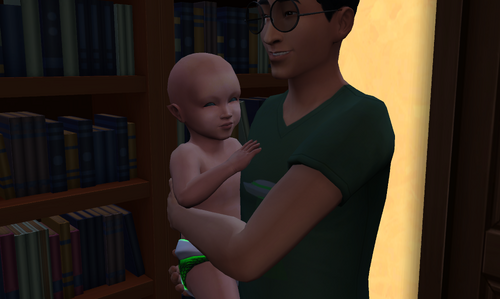 I didn't think to age the baby up to check whether she had alien eyes as a toddler. Also, I might have missed her other alien features (ears and voice) when the baby was born at home because she didn't get an alien bassinet or an alien outfit and I thought she didn't have any alien features at all. So far it seems like Pascal baby is always a girl with human skin, alien eyes and alien ears, right? —Gvaudoin 💬 00:17, April 25, 2019 (UTC)

Retrieved from "https://sims.fandom.com/wiki/Talk:Tycho_Curious?oldid=873323"
Community content is available under CC-BY-SA unless otherwise noted.