This is a page for discussing improvements to Malcolm Landgraab

It appears that different console platforms have different versions of an adult Malcolm. He does not always go into the same profession or marry the same person. This is going to make infoboxing and family-tree updating difficult. Dharden (talk) 22:06, December 24, 2010 (UTC)

Dudley changed his name to String Bean, even if he has kids they will have the "bean" surname anyway. Mimi marries into a poorer-class family and possibly takes their surname.

Adrien + someone (Rita Nelson?) = Posie's husband (Posie and her husband have Christina)

The Landgraab family tree in my opinion

Suggestion to merge this page with Malcolm Landgraab (console)

I'd like to suggest merging the two pages for Malcolm Landgraab. Both articles could be improved and it seems highly likely that they are the same person. (It definitely makes more sense than the different versions of Bob Newbie and Betty Newbie being the same people.)

I agree that he's probably a distant cousin to Malcolm Landgraab III. It's also established that he remarried (possible multiple times).

I'm not too entirely sure if we should be deciding whether or not all these Malcolm Landgraabs are the same people. Since the wiki is supposed to be reporting on the facts, if there are any ambiguities it may be better to keep pages separate. That being said, I noticed that there is a Sims 4 Sim on this page which should probably go on a Malcolm Landgraab (The Sims 4) and not in this article, given how TS4 is in a parallel universe. —k6ka 🍁 (Talk · Contributions) 15:07, January 24, 2018 (UTC)

Oh wait, hmm that page was already created... as a bad, low quality stub (which I have since redirected). Perhaps it's time we organized this stuff better?

Since this Malcolm Landgraab appears in more games and appears to be more prominent, perhaps we could do the following:
For the last point, though, is there any evidence that suggests the two are definitely the same person? That would be a lot of information crammed onto one page... and the excessive usage of {{Sim}} templates could possibly break the parser as those templates are not cheap to use. —k6ka 🍁 (Talk · Contributions) 15:13, January 24, 2018 (UTC)

I think your suggestion makes a lot of sense. The only real inconsistency happens with the Sims 4 version where Malcolm is younger than Bella and Mortimer while they are the same age in the Sims 3 and the console games. But the same happens with other Sims as well like the Caliente sisters who are also very different in the Sims 4 and it's meant to be an alternate universe anyway.
Regarding the templates: The article would use 5 Sim templates if we don't use the grey one at the start. Gvaudoin (talk) 18:02, January 27, 2018 (UTC)

I would also agree as it would make the information of the Landgraabs less congested and make it easier for others to find information about the Landgraabs, although a good question is whether or not consistency of Sims matters in the case of merges. Seyurian18 (talk) 09:58, March 12, 2018 (UTC)

Well, I think there are always some inconsistencies because the producers don't pay that much attention to continuity but I still agree with k6ka's suggestion and I think the article could be vastly improved by merging the pages and giving the article a better structure. In the intro it could be mentioned that he was first introdurced in SimCity 3000. After that I would use chronological order for the biography (The Sims 3 - The Sims 3 (console) - The Sims (console) - The Sims Bustin' Out (console)) with the exception of the alternate universe version from The Sims 4. Some of the notes from the end of this article would become redundant while most of the trivia from the console article could be used for the biography. Gvaudoin (talk) 14:00, March 12, 2018 (UTC)

I agree with what you say as that could help improve the article and make reading information about Malcom easier. Seyurian18 (talk) 08:09, March 13, 2018 (UTC)

I would prefer the articles remain separate for now. There isn't enough evidence to say that the two Sims are the same person, considering multiple people are purposefully named Malcolm Landgraab. Ѧüя◎ґ (talk) 16:21, March 13, 2018 (UTC)

But if we make a Malcolm Landgraab (The Sims 3) and a Malcolm Landgraab (The Sims 4) page wouldn't that mean that we need to separate the pages for Nancy Landgraab and Geoffrey Landgraab? I feel like that could trigger a chain reaction and a lot of other pages would have to be seperated too. I think that they are very clearly meant to be the same character just like the Dina Caliente and Nina Caliente who are also different in each game. So, I don't really see why Malcolm Landgraab should be the one with multiple pages. I agree that it's very confusing right now though. The best idea imo is still to rename the disambiguation page and rename this page to "Malcolm Landgraab". Just have seperate sections for each game on one page like with the Goths, the Calientes, and so many others. —Gvaudoin 💬 20:01, November 27, 2018 (UTC)

You have a point. I did see a discussion somewhere around here about seperating The Sims 4 versions from the rest or making a seperate page for every single version, but until that discussion is resolved it's probably the best for now to simply rename this page to "Malcolm Landgraab". - KailynnKat(talk/fanon) 20:10, November 27, 2018 (UTC)

It seems like the easiest solution to me. I'd also like to add that there has never been a lot of consistency when in comes to things like age and personality. For example, Kaylynn Langerak is a lot younger than Bella and Mortimer in The Sims 2 but she's older than them in The Sims 3. In The Sims 2, Dina is lazy and Nina is active but in The Sims 4 it's the other way round. EA should consult the Wiki when they make these characters! 😄 —Gvaudoin 💬 20:25, November 27, 2018 (UTC)

It's been confirmed that this Malcolm is a younger version of Malcolm Landgraab (console).

An official version of an elder Malcolm with his family was uploaded to the Gallery by Maxis: https://www.ea.com/games/the-sims/the-sims-4/pc/gallery/AB949CBF7D9F11E986D926A9E137F5E7 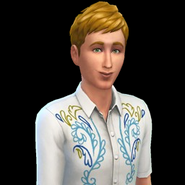 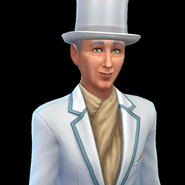 Retrieved from "https://sims.fandom.com/wiki/Talk:Malcolm_Landgraab?oldid=877125"
Community content is available under CC-BY-SA unless otherwise noted.