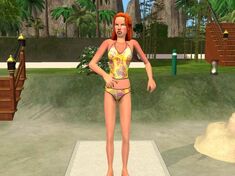 Sunburn was originally introduced with The Sims 2: Seasons, should a sim spends too much time under the sun. In The Sims 2: Bon Voyage, sims can get a sunburn while vacationing at Twikkii Island. It can also occur from prolonged exposure to the sun from sunbathing on the beach. When a Sim gets a sunburn, their face and portrait turns red.

Sometimes if a Sim is in the sunburned position for too long they will faint and will have suffered heatstroke. This can be resolved in 3 ways:

Heatstroke can be avoided by cooling a Sim, either by having them drink lemonade or water from a sink, or moving them indoors or into a pool. Putting them in a hot tub is not recommended though.

After around 3 days, the sunburned Sim will revert to normal. If it doesn't revert, then the player is experiencing a known bug and the Sim in question will remain burnt forever. The only known remedy is to download a third-party hack, the FFS Lot Debugger, and use it to reset a burnt Sim.

In The Sims 3, sunburns work similarly to that in The Sims 2. During times of sunny weather, Sims will turn red and receive an "uncomfortable" moodlet when they stay too long under the sun.

Sunburns initially did not return in The Sims 4: Seasons, unlike previous weather-themed packs. It instead returns with The Sims 4: Island Living. Sims can sunbathe on lounge chairs, beach towels or floats, and after four in-game hours, their skin will turn red and become sunburnt. Sunburns in The Sims 4 are more advanced than in previous games in that they will only show portions of skin that was exposed by the outfit the Sim was wearing when they were burnt. For example, if a Sim was wearing a tank top when a sunburn happens, the Sim will only show red skin on their arms and face, but their torso will remain unburnt.

Sims are unable to become sunburnt by simply spending too much time in the sun or a heatwave, even if Seasons is installed. It can only happen when a Sim spends too long sunbathing.

Once a Sim has a tan or is sunburnt, this takes about 3-5 days to disappear. There is no way to get rid of this quicker and the Sim just has to wait it out.

Retrieved from "https://sims.fandom.com/wiki/Sunburn?oldid=884970"
Community content is available under CC-BY-SA unless otherwise noted.