Listen) family consists of Oberon, Titania, Bottom and Puck Summerdream, who live in Veronaville. Their address is 71 Bard Boulevard. In The Sims 2, Oberon and Titania aren't married, but may have the want to be married. Puck and Bottom were adopted (see the adults' memories).

Puck is in love with Hermia Capp. In the Story Mode, there is a little boy very close to two adults. It is possible that the adults are Puck's parents who bring him to the orphanage. The woman sitting down is likely the orphanage caretaker. The family is named after Shakespeare's play, "A Midsummer Night's Dream." In the play, Oberon is the king of the fairies; Titania is the queen of the fairies; Puck is a fairy; and Bottom is a victim of Puck's spell, which causes Titania to falsely love him. Like the Capp family, the Summerdream family is matrilineal, which means that things are passed down the female line. In the family tree, it is obvious that the family name is passed down to Bottom and Puck through the maternal line. Matrilinearity does not mean matriarchy. Therefore, it is up to the player to decide whether or not the family will be a matriarchy, allowing Bottom to be the heiress of the property and have other freedoms. 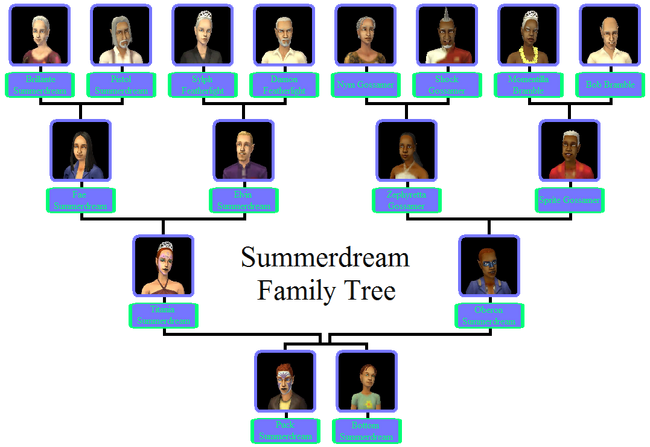 The entire Summerdream family
Add an image to this gallery
Retrieved from "https://sims.fandom.com/wiki/Summerdream_family?oldid=937938"
Community content is available under CC-BY-SA unless otherwise noted.