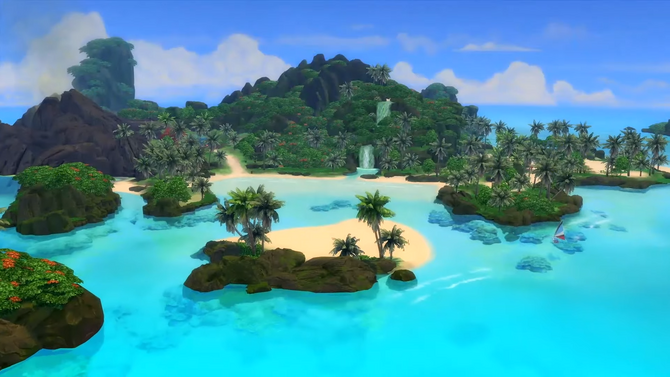 Sulani is a world introduced in The Sims 4: Island Living. It is based on Polynesian islands, with the Hawaiian Islands being the main influence on the world's look and feel.

Get up close and personal with Sulani's active volcano! Or admire it safely from afar...

Sulani's crisp ocean waters are your aquatic haven for Swimming, Snorkeling, or making a dolphin friend!

Sulani consists of three neighborhoods which are actually three islands.

§20,000
Oliana Ngata, Tane Ngata, Leila Illes
Coming to Sulani for inspiration Leila didn't expect to fall in love so deeply with the islands. And it wasn't just the scenery that she fell for, but also for Oliana and her son Tane that welcomed her so easily into their family. The three are now an insparable [sic] ​trio that call Sulani their home enjoying the sand and ocean at their own pace.

If The Sims 4: Seasons is installed, Sulani will have slightly different weather compared to most worlds. Namely, all weather types are higher in temperature, with winter only going as low as cool. There is a new weather type only found in Sulani called "monsoons". Monsoons are extreme thunderstorms that are stronger than normal thunderstorms in other worlds but happen for a shorter period of time. Monsoons only occur randomly during late summer to late fall.

Snow is also not present in Sulani, but Sims can use the weather-controlling machine to temporarily make snow appear.

Add an image to this gallery
Retrieved from "https://sims.fandom.com/wiki/Sulani?oldid=932149"
Community content is available under CC-BY-SA unless otherwise noted.