A stray is a cat or dog that does not belong to any Sim. Strays are very much like townies, except that they are animals. However, strays who enter a residential lot will usually stay a while, instead of just walking by as townies do.

Strays were first introduced in The Sims: Unleashed, and reappeared in The Sims 2: Pets, The Sims 3: Pets and The Sims 4: Cats & Dogs. In all four games, Sims can befriend and adopt strays, though they must be on their home lots in order to adopt. Any pets in the family may also autonomously interact with strays, and develop a relationship with them.

Strays that are invited into the house will behave like guests. They will use objects that belong to the household, e.g. eating from the food dish and sleeping on the couch.

Unlike Townies in other expansion packs of The Sims, the game does not randomly generate the Strays: they are the same in every neighborhood, and in all games. All the default strays in Unleashed have zero personality points and no skills. They can learn skills, but their lack of personality points can only be changed if the player uses a third-party program or hacked object.

The game will not replace strays who are adopted; however, a cat or dog owned by player-controlled Sims will join the Strays family if it is neglected. The easiest way to force a pet to become a stray is to wall up the pet in a room with nothing but a food bowl. Keep the food bowl full, wait until the pet's Fun and Social become totally red, then take away the food bowl. As the pet's hunger declines, with its Fun and Social in the red already, its overall mood should drop sufficiently that it will run away before it starves.

Pets belonging to playable Sims will also visit lots in the same way that strays do, without their owners. Both strays and playable pets can be told not to stay on a lot by placing the The Stray Away Pet prevention System sign on the lot.

The warning that appears if a pet's mood drops too low.

The message that appears if a playable pet joins the strays. 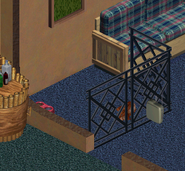 An example of the method above in action. A runaway pet will disappear regardless of any obstructions in its way.

A neglected pet's relationship with its master will decline.

Unlike dogs and cats living in households, strays have no last name. The pre-made strays are the same in all neighborhoods and all games, but if a stray is adopted, the game will generate a random replacement with a random name. The Pack leader and other wolves have random names.

In general, strays will visit less frequently than in Unleashed, and fewer of them will visit at any one time. Usually, only one will visit at any given time. Unlike Unleashed, players cannot purchase a sign to tell strays to stay away, although in The Sims 2: Pets for console, the Stray Away! sign can be used to fulfill the same purpose.

Usually, a stray will have partially learned one or more behaviors, though not always in a positive direction. In addition, some strays will have learned some commands.

When the Pets patch or a later expansion pack is installed, strays will no longer visit community lots unless a player-controlled Sim is on that lot with one of his or her pets. This can be fixed by using this mod.

Here is a list of strays who appear in every neighborhood.

Strays reappeared in The Sims 3: Pets. Strays can be found on both community and residential lots, and like the previous games, Sims must build a relationship with them before they are able to adopt them. Having certain objects inside the home may attract strays. Pets are attracted to full food bowls and pet houses. Stray gnomes may also attract them. Stray pets do not have pre-made names and are only known to the player as "Stray Cat", "Stray Dog", or "Wild Horse".

Each stray species is more likely to be found at their respective lot assignment: cats at the cat jungle, dogs at the dog park, and horses at the horse ranch.

Players can immediately add strays to the household with the use of testingcheatsenabled. Once said cheat is enabled, Shift-clicking on a stray will provide an option to add it to the family.

Strays return in The Sims 4: Cats & Dogs. They can be found anywhere in Brindleton Bay, on both community and residential lots. To have strays appear in other worlds, the player can use either the "Cat Hangout" or "Dog Hangout" lot trait. Just like in previous games, Sims can build relationships with strays and possibly adopt them, if the Sim has a high enough relationship.

Similarly to townies, strays are randomly generated, but unlike townies, they are not accessible in the households menu of Manage Worlds. There are however, two pre-made stray pets who are viewable in Manage Worlds called Mayor Whiskers, who is the cat mayor of Brindleton Bay; and Captain Whitaker, who is a ghost dog. There are also a few strays that can be downloaded from the Maxis Gallery profile, but they are not in the game by default.

Like in The Sims 3, players can use testing cheats to immediately add strays to their current household. After enabling the cheat, they can Shift-click on a stray and select "Add to Family".