Merge
This article or section is being considered for merging with Skunk. See the discussion page for details.

For the skunk in The Sims: Unleashed, see Henri LeStanc.

Stinky Skunk is an NPC introduced in The Sims 2: Pets. It will randomly appear on a residential lot and Sims can either pet, watch, or chase it off the lot. If a skunk is trapped in fences or walls, multiple skunks may appear on a lot, though all skunks on the lot will have the name of Stinky Skunk.

The skunk will usually leave if chased off, but may become annoyed and spray. The skunk may initially tolerate being watched by a Sim or followed by a pet, but will eventually become annoyed and spray. According to the Prima guide for Pets, a werewolf has a better-than-even chance of being able to pet a skunk without being sprayed, but other Sims only have a 5 percent chance of not being sprayed.

The skunk will threaten before spraying, so a Sim or pet that is watching or following it may decide to move on, though that will not always keep them from being sprayed. Genius pets and pets who have been sprayed before are more likely to recognize that the skunk is preparing to spray, as are Sims with high logic. When a Sim or pet is sprayed, his or her hygiene meter will drop to zero. The comfort and fun meters will also drop slightly, but it may pass unnoticed unless the player is looking at the meters.

Warning
Do not attempt to add skunks to a household, or interact with them in any way outside of their in-game designated purposes. Doing so can cause game corruption, fixed only by uninstalling and reinstalling the game.

Two Stinky Skunks on the same lot in The Sims 2: Pets. 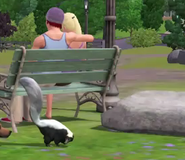 A cat that looks like a skunk in The Sims 3: Pets.
Add an image to this gallery
Retrieved from "https://sims.fandom.com/wiki/Stinky_Skunk?oldid=927798"
Community content is available under CC-BY-SA unless otherwise noted.