Stephen Tinker is a pre-made playable Sim who resides in Bluewater Village with his wife, Wanda Tinker, and daughter, Melody Tinker. He and his wife have just founded a home toy shop. Stephen's wife is just as skilled at making toys as he is, but his daughter Melody Tinker, who is supposed to take over the shop one day, lacks both the skills and interest in toy-making. He has a bronze badge in toy making. When first played, Stephen is 11 days from becoming an elder.

He is very neat and likes to organize his shop, but is very shy and lazy otherwise. Stephen is slightly more playful than his wife. His fitness bar indicates that he is supposed to be thin, even though his actual body shape is fat. If Stephen exercises, he will immediately become thin; however, if he overeats, he will remain fat.

At the start of the game, Stephen will want to have another baby, and will also want for his daughter to become an overachiever. He doesn't have any memories of both of his parents. He also doesn't recognize them as deceased, because he has no memory of his parents death.

Stephen, as well as Checo Ramirez, are both mentioned in the descriptions of various objects from The Sims 4: Movie Hangout Stuff, where they are said to travel through several towns from The Sims 3, in which they meet some their residents.

When editing in SimPE Stephen's zodiac sign is not recognized. He is voiced by Stephen Kearin. Stephen's facial structure is almost, if not identical to the 5th Maxis face template in Create a Sim. 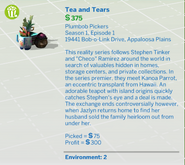 One of the object descriptions in which Stephen is mentioned.
Add an image to this gallery
Retrieved from "https://sims.fandom.com/wiki/Stephen_Tinker?oldid=818506"
Community content is available under CC-BY-SA unless otherwise noted.