Stephen Loyal is a pre-made playable adult Sim from Mesa Flats, one of the neighborhoods shipped with The Sims Pet Stories. He is the protagonist in the Midnight Masquerade story. He is the cousin of Celeste Girard. Stephen works as an executive chef at the renowned SimCity restaurant Julianne's. He tends to be set in his ways, trying to keep convincing himself he's perfectly happy with his life the way it is. The problem is that he's not entirely sure he believes it and he's recently become open to more outside influence in his life.

Stephen has the Knowledge aspiration and the Scorpio zodiac sign. As far as personality goes, Stephen is quite neat and somewhat active. But also somewhat grouchy and quite serious. When it comes to his skill points, Stephen is past halfway towards maximizing the logic skill, is halfway towards maximizing the cooking, creativity, and cleaning skills, and has low body, charisma, and mechanical skills. His main interests are Food, Health, and Work.

The story starts with Stephen cooking his first meal in his new house. Then, Julianne Charlot shows up to grant him the honor of preparing the catering and centerpiece for the annual Midnight Masquerade hosted by his boss Julianne. When she leaves, Stephen's best friend James Briggs shows up to tell him that he is late for Celeste's wedding. Stephen rushes over to the wedding at A Little Salmon Wedding Chapel and apologizes to his cousin. Stephen then joins the buffet and notices someone new, Gordon Fetching. He asks his friend James who he is and James says Gordon is the best man of the groom, Damien Girard. James Also tells Stephen that Gordon is new in town and that Stephen can kiss the ladies goodbye. Stephen decides to be polite and introduce himself to Gordon, who makes a joke about Stephen being late that doesn't land well. Stephen then decides to ask Rachel Ware, someone else at the wedding who he hasn't met before, to dance. They seem to get along well and Stephen asks her out. Rachel says she'd like to, but already has plans with Gordon. Now Stephen understands what James meant with "kiss the ladies goobye". Celeste tells Stephen that her friend Erin Davis can't take care of her cat Diva, while she and her husband go on honeymoon and says that Stephen owes it to her after missing part of her wedding. Stephen agrees, even though he will be busy preparing the food for the Midnight Masquerade. Stephen then leaves the wedding party. When he arrives home he reiceves the aquarium he ordered.

The next day, Celeste and Damien went off on their honeymoon and Celeste's friend Erin shows up at his door to drop Diva off. Erin tells Stephen that she would've loved to take care of Diva for Celeste, but her dog Buster keeps using Diva as a pillow. Stephen thinks Erin is cute and invites her in for coffee, but she can't stay long because she is finishing a painting. While Stephen and Erin drink coffee, Diva starts to scratch up Stephen's favorite couch. So he scolds her. Erin calms Stephen down by saying that Diva's just getting familiar there and that she used to be a veterinarian, so he can trust her.

The next day, Diva pees in the kitchen and Stephen decides to buy a litterbox at Mesa Flats Pet Supply, the local pet store. After buying a litterbox with Diva, Gordon walks in and gets the women's attention. After he flirts with a woman, Diva scares him, causing everyone in the store to laugh at Gordon. Gordon then insults Diva and tells Stephen to keep her away from him. He also tells Stephen to stay away from "his" Rachel. He then leaves and Stephen and Diva also go back home. Stephen then invites James over to watch the news together. The news reveals that there was a con-man operating in Arbor Falls and that he may have moved on to Mesa Flats. After James leaves, he receives a cat condo that Celeste bought for Diva.

The next morning, Stephen decides to work out. Later, he calls Rachel to go out. She says she's with Gordon at the moment, but that she can meet Stephen in a few hours at Club Z. Once there, Stephen and Rachel have a fun time dancing. When Rachel asks him who he is taking to the Midnight Masquerade, Gordon shows up again. He tells Rachel he thought about her proposal from last night and wants to discuss it with her right away. Rachel agrees and they leave together and Stephen decides to go home. To Stephen it seemed like Rachel wanted him to ask her to the masquerade, but that he can't compete with Gordon.

The next day, Stephen teaches Diva the Roll Over command and then Erin passes by while walking her dog Buster. Stephen asks Erin to go out at Chez Prix. Erin agrees, finishes walking her dog and meets Stephen at the restaurant. The two have dinner, but after eating the food they feel sick as well as the whole restaurant. They decide to take photos in the photo booth, which turn out to be terrible. They then both head home.

The next day, Stephen, after cleaning his kitchen, prepares salad for the Masquerade but Diva eats it. When Julianne arrives to pick up the salad, he has to dissapoint her. He goes to Six Points Plaza and buys some groceries to make a new salad. He meets Erin there and she says she brought him some special soup to help him feel better after getting sick at Chez Prix. Erin tells him that the recipe is a family secret and that it's a mother-daughter tradition. Stephen then shows off the Roll Over command he taught Diva and asks Erin to the masquerade. Erin says she'd love to go with him, but Gordon already asked her. Stephen goes back home, eats the special soup and feels a lot better. He also receives a scratching post that Celeste sent for Diva and makes the salad for the masquerade, which Julianne picks up.

Next day, Stephen prepares the lobster thermidor for the masquerade and Julianne comes to pick it up. He then meets James at Flat Hat Bar to play poker and James tells him the Police in Arbor Falls had determined that the con-man's last name starts with an S which means Gordon Fetching can't be the guy. While they're talking, Rachel comes and joins the game. She later dances with Stephen and while she's at the ladies' room, Gordon arrives with his henchman Anthony Zilch. Gordon beats Stephen up because he warned him about Rachel and Anthony decides to fight James, but loses. After that, Rachel comes and Gordon asks her if she'd like to go to masquerade with him, but she says that she had already agreed to go with Stephen. Gordon says that he and Rachel still have their business project to handle and leaves with Anthony.

Next day, Rachel comes and tells Stephen he is going to Club Z with her, because he has been working nonstop. When they get to Club Z, Gordon and Erin turn out to be there too. Stephen and Rachel sing karaoke together. After that, Gordon tries to grab Rachel, but she pushes him away. Stephen then decides to kiss Rachel in front of Gordon to make him leave her alone. Erin sees them kissing as well and asks Stephen if he's dating Rachel now to which he replies 'sort of' which makes Rachel angry, so she tells him she'll call tomorrow and leaves. Gordon then says Erin painted him in a portret and gives the painting to Stephen to show off. After that, Gordon and Erin leave together.

Next day, Stephen invites Erin to Sal's Bratwurst and Culture because he feels bad about what happened at Club Z. Once there, Stephen introduces Erin to his friend Sal Zugovich and they order a table. After Stephen and Erin eat, they slow dance. Erin tells Stephen that she thinks they are at different places in their lives and mentions Gordon. Stephen interrupts her and starts to insult Gordon which makes her angry because she just wanted to tell him she's confused, not get him start on a rant about someone she cares for. Erin then leaves. Sal comes to Stephen and tells him he needs to become a better listener and gives him a Bougainvillae; A hanging plant under which Sal says he proposed to his wife Greta Zugovich. He also tells Stephen to never underestimate the power of ordinary beauty. Stephen then heads home.

Next day, Rachel calls Stephen to come over to Six Points Plaza to help her pick out a mask to wear for the Midnight Masquerade. After doing so, he sees Erin and buys her roses and apologizes to her for last night. Later, James comes and Stephen tells him that he's in love but not saying with who. James says they are catching up with the con-man and Stephen is convinced that it's Gordon hiding behind a false name and that Erin and Rachel are in trouble. Stephen the goes home to work on the ice sculpture for the masquerade and after he is done Julianne comes to pick it up.

On the Masquerade day, Stephen calls Rachel to see if she's ready and after picking his mask he heads to the Amber Hall. After he comes there Julianne thanks him for all the effort he put into preparing the food and Sal complements him. Julianne tells him that Gordon will play music for the masquerade. Stephen dances with Rachel, while Gordon is dancing with Erin. Gordon tells Rachel she looks great, but that she chose the wrong date. Rachel then agrees to one dance with Gordon, but says that she didn't come to be with him. Stephen decides to talk to Erin, but then Gordon is about to play and she wants to go listen. Gordon removes his mask in order to play music and Stephen takes the chance to wear it. He then notices Gordon's henchman, Anthony Zilch, heading to the roof. Stephen then follows him and beguiles Anthony, who falls for his disguise and tells him that everything is in place and that they'll have all the girls' simoleons by morning. Anthony also reveals that Gordon's last name is actually Schickel. Stephen immediately tells that to James who informs the police. After Julianne announces Gordon as the king of the Midnight Masquerade, James gets back with the police and arrests him and Diva also stops Anthony from escaping. Stephen is then annouced king instead and must decide who will be his queen: Rachel or Erin?

If the player chooses Rachel, he'll ask her to move in and she'll give him a hot tub as a present. If the player chooses Erin, he'll propose engagement and they'll go on a romantic trip to Simaican Isles. On the end, when Stephen checks his email, he'll see a message from Celeste who says that she's going on a cruise with her husband and that he should keep Diva.

After the story, Stephen and Diva (and possibly Rachel) become playable from their home in 1 Catopuma Crescent. 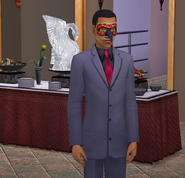 Stephen at the Midnight Masquerade.