Sprite Gossamer (né Bramble) is one of the pre-made, yet unplayable ancestral Sims that resided in Veronaville in The Sims 2. He was the son of Bob, and Momentilla Bramble, the husband of Zephyretta Gossamer, the father of Oberon Summerdream (né Gossamer), and the adoptive grandfather of Puck and Bottom Summerdream.

Sprite's gravestone does not exist within Veronaville, so he can't be made playable without the use of hacks. As a result, the only indication of Sprite's existence is provided by the family tree of his descendants. Unlike most pre-made deceased Sims from Veronaville, Sprite actually does have personality points and interests, though like most deceased Sims, he has no skill points.

Even though Sprite has grey hair in his thumbnail, his hair color is actually brown. This can also be distinguished by the color of his eyebrows and sideburns. Examining Sprite's SimDNA in SimPE shows that his genetics are also for brown hair. Like many other pre-made Veronaville Sims, the object and texture detailing of his head-shot is very low.

According to Sprite's age data, he had 39 days left in the adult life stage when he died, which implies that he may have had access to Elixir of Life at some point after he became an adult. There is a picture of Sprite as an elder hidden in the game files. This one is quite different from the head-shot of him as an adult, showing him with grey eyebrows and sideburns, no hair and a blue shirt. 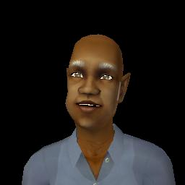 Retrieved from "https://sims.fandom.com/wiki/Sprite_Gossamer?oldid=820468"
Community content is available under CC-BY-SA unless otherwise noted.