The Spencer-Kim-Lewis family is a pre-made household featured in Willow Creek, from The Sims 4 base game. It consists of Alice Spencer-Kim, her father Dennis Kim, daughter Olivia Kim-Lewis, husband Eric Lewis and Eric's mother Vivian Lewis. They are the only household in The Sims 4 base game to have no Sims employed in any career track when first played. This means that players should give at least a few of them a job so they can pay the bills.

Kim: Korean surname meaning gold.
Spencer: Derived from the Old French despensier, a steward.
Lewis: From the Norman personal name Lowis, Lodovicus.
Dennis: Usual English, German and Dutch form of Denis.
Lydia: Means "from Lydia" in Greek.
Alice: From the Old French name Aalis, a short form of Adelais, itself a short form of the Germanic name Adalheidis.
Vivian: From the Latin name Vivianus which was derived from Latin vivus "alive".
Eric: From the Old Norse name Eiríkr, derived from the elements ei "ever, always" and ríkr "ruler".
Olivia: Derived from Latin oliva "olive". 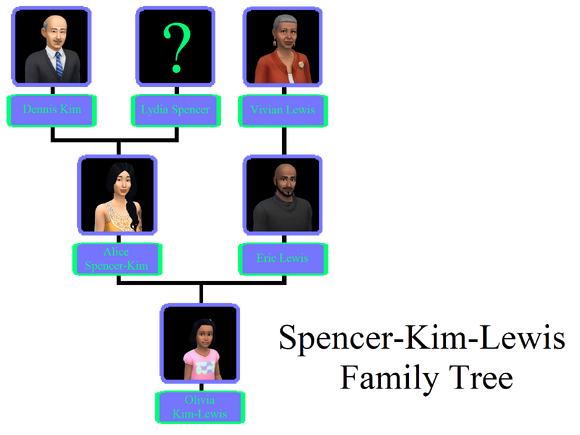 Add an image to this gallery
Retrieved from "https://sims.fandom.com/wiki/Spencer-Kim-Lewis_family?oldid=918129"
Community content is available under CC-BY-SA unless otherwise noted.