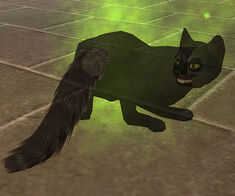 A spectral cat is a cat familiar that can be summoned by a witch through the spell "Apello Cattus Amicus." Players need The Sims 2: Apartment Life and The Sims 2: Pets to do this task.

The first time the familiar is summoned the player will be told to give it a name; the name bar starts off with "_____'s Familiar." This shining, ghost-like cat will be a witch's companion and familiar, and will have some new features that normal cats don't have.

The spectral cat will never age, has no gender and is unable to breed. It also doesn't have the bladder need, so litter boxes are unnecessary, although they can learn how to use the toilet. If one of its need bars ever gets too low, or if the summoning witch leaves the lot, it will vanish, but can be resummoned with the same spell with its needs full.

Unfortunately, no spectral cats can have a career, but they can learn commands. The cat's appearance will reflect the witch's alignment: white cats with blue aura for good witches, dark grey cats with orange aura for neutral witches, and black cats with green aura for evil witches.

Unlike other pets, the spectral cat is immune to the Tempus Interruptus spell.

If the witch moves to another lot without the spectral cat with them, then the next time the cat is summoned, a new cat will appear and the player will have to name the cat again. In order to prevent this, before moving the entire family out, spectral cats must be summoned and present. Once they are summoned and present, save and go to the Neighborhood view, then move the family into the family bin. After that, the family can be safely moved into another lot with the same spectral cats.

Retrieved from "https://sims.fandom.com/wiki/Spectral_cat?oldid=916228"
Community content is available under CC-BY-SA unless otherwise noted.