The Specter family (or Spector in Lunar Lakes) consists of Olive Specter and her niece Ophelia Nigmos, in The Sims 2. Olive also has a son, Nervous Subject. He was taken away from her as a child, for reasons which still remain unknown, and lives with the Beaker Family. His father is believed to be the Grim Reaper, although there is no father shown in his family tree. When Olive dies, her inheritance goes to Nervous, instead of going to Ophelia, the expected heir.[1]

When the family is first played, it is around 6:30 pm on Tuesday, two days before Ophelia will become an adult, and two days before Olive is scheduled to die. While Tuesday is a bill-delivery day, there are no bills in the mailbox.

Olive Specter and her deceased sister, Willow Nigmos, were children of Lerato Muenda and Peponi Muenda.

Olive's memories show she was left at the altar when she was an adult, and the man who left her at the altar, Earl E. DeMise, died shortly afterwards. She married many times after that, and all of her other husbands met an early end, as well. She was also the witness to several NPC deaths, and their graves remain on her lot. Their ghosts wreak havoc on the yard, causing many puddles and weeds to appear, showing that the ghosts are angry.

Ophelia Nigmos is the daughter of the deceased Creon and Willow Nigmos. She was sent to live with Olive after their deaths. Olive and Ophelia's address is 13 Dead End Lane.

In The Sims 3, a descendant of the family, named Noela Spector, lives in the store world Lunar Lakes. It is unknown what type of connection she had to the family. By this time, the family's name spelling has been changed from Specter to Spector. Also, considering Olive is the only Sim alive holding the "Specter" surname in The Sims 2, the only possible way for the family to expand would be to make Olive have another child in her elder stage, which is possible via adoption. Or to give Nervous the last name Specter with hacks, such as SimPE.

The family makes its return in Midnight Hollow, also from the store. A younger version of Olive lives with her still toddler son Nervous Subject. Her sister and parents are absent in this neighborhood, but three of her ex-husbands are already buried in her cemetery. Rigger Mortis, Hugh Thanasia and Ichabod Specter all have their gravestones in Olive's lot in Midnight Hollow, although Earl E. DeMise is absent. It has been observed that the chronology of Olive's life is altered in Sims 3, as, according to her memories, Earl was her first partner, and Ichabod did not pass away until after Nervous had been taken by the social worker.

The final appearance of the Specter/Spector family is in Oasis Landing in the expansion pack The Sims 3: Into the Future. Planchette Spector is described as being the last of the Spector family. He lives in Oasis Landing with his Plumbot, 5P1R17, whose serial number resembles the word 'spirit' in leet-speak. Planchette is also described as "an adventurous Sim who is desperate to open the door to the crashed ship. It's consumed his life and has nearly driven him to madness..." He is also said to have been returned from the dead.

Judging by the first and last names of some family members, the family may be of Greek and East African descent.

Specter ghost, or something that haunts the mind

Rigger Mortis (Olive's first husband): 'Rigger' means to rig or dresses, while 'Mortis' refers to the French word 'mort', which means death. Rigor Mortis is a state in which a corpse's limbs become stiff and difficult to move.

Hugh Thanasia (Olive's second husband): From the word 'Euthanasia', means literally "good death" in Ancient Greek. Refers to the practice of ending a life in a painless manner.

Nigmos -- Possibly taken from "enigma" - a mysterious occurrence, also means "a confusing character or person", which could possibly refer to Olive herself.

Muenda -- Could refer to Munda, which is a place in the Solomon Islands. Muenda is also a traditional African name meaning "one who cares for others" in the Meru language. 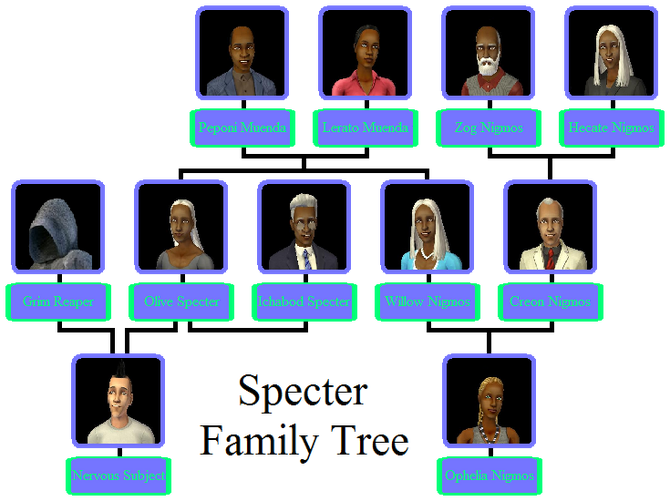 Olive and Rigger on vacation

Ophelia accommodates herself on the bed

The Specter's House
Add an image to this gallery

Retrieved from "https://sims.fandom.com/wiki/Specter_family?oldid=944487"
Community content is available under CC-BY-SA unless otherwise noted.