The Sims Wiki
Register
Don't have an account?
Sign In
Advertisement
in: Sims, Female Sims, Young adults,
and 22 more
English

Sophia Carol is a Sim who once lived in Dragon Valley. She burnt to death and now rests in the local graveyard. She is entirely yellow like the other deceased Sims from the neighborhood.

Sophia has a statue dedicated to her in Buy mode. According to the description of the statue, Sophia was a hero who fought dragons, but she eventually died during a battle. That's probably why she was burned, as dragons are stereotypically conveyed as being able to breathe fire. It is unknown why her statue has wings, as she was a dragon slayer, not an actual dragon.

She has rather strange traits for a dragon slayer, given that she has the Couch Potato and Hates the Outdoors traits, and lacks the Brave trait, which one would think would be necessary in order to fight dragons. This is mere speculation, but it is possible that this could be a reason why she died.

She must be an ancient Sim, and have died over a hundred years ago, given that she was killed by a dragon, and they were finally defeated by Seamus O'Connell's great-great grandfather. 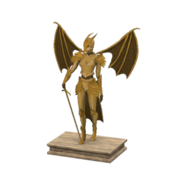